The Nissan 370Z Nismo is a more powerful, harder cored coupe. Can it take on the Porsche Cayman? 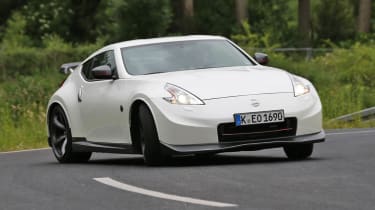 What is it? A faster, fitter and fully-loaded Nissan 370Z that comes in full-on battle dress and promises to hone and sharpen the brawny but occasionally uncouth Zed coupe. Power and torque increase, the suspension is heavily revised and the aerokit is said to improve aerodynamic balance at speed. It costs £36,995 fully loaded with options – just choose a grey, black or white finish. The standard Zed starts from £26,995.  Technical Highlights? A Nismo version of the 370Z has been out in the US since 2009 but this model has been specifically tuned for European tastes, apparently. Power is up to 339bhp at 7400rpm and torque to 274lb ft at 5200rpm thanks to a revised ECU and a freer-flowing exhaust. It is only available as a six-speed manual with the neat rev-syncro heel and toe system. More effort has been put into the suspension; damper rates are up by 23 per cent at the front and 41 per cent at the rear. The front spring rate is also increased by 14 per cent.  It runs lightweight 19in Rays forged alloy wheels and unique Bridgestone Potenza S001 tyres and has upgraded brake lines and fluid shared with the Nissan GT-R. Nismo has also added five additional body reinforcements (strut braces front and rear plus underbody strengthening) to increase structural rigidity by around 25 per cent. The Nismo 370Z is claimed to hit 62mph in 5.2sec on its way to a limited 155mph top speed.  What’s it like to drive? Old school. The 370Z is a refreshingly honest, simple drivers’ car in a world of cars with variable everything but little in the way of feel and charm. Some will hate the body kit but I love its could-only-be-Japanese appeal. On the road the Zed feels a bit like it looks. The engine is super-brawny but also harsh and not particularly willing to rev much past 5500rpm. The steering feels natural too, and the standard car’s tendency to kickback over ragged surfaces didn’t materialise on the admittedly smooth test route. Perhaps a sign that the more rigid structure has paid dividends. There’s also a nice heft to gearchange and brakes and the strong mid range power allows you to easily feel your way into a well-balanced and forgiving chassis.

Buy a Nissan GT-R for similar money to a Nismo 370Z The real improvement over the standard car is in the body control. Where a normal Zed quickly starts to become ragged and imprecise as you up the pace, the Nismo hangs on more gamely and the clumsy roll-oversteer was almost eliminated on the excellent test route in Germany. There’s perhaps a shade more understeer than the standard car but the transition into oversteer is cleaner and the car stays flatter and more poised at all times. Sadly the engine is really very harsh when you want to exploit its full potential and rather comes to dominate proceedings. It could also do with a more aggressive locking differential to make the most of its obvious balance.    How does it compare?  In relation to a Boxster or Cayman? Terribly. The Porsches have really moved the game on and a mildly tweaked 370Z just doesn’t make sense at £36,995 no matter what the spec sheet says. On the right road it can be great fun but it doesn’t have the depth of polish of the Porsches and feels too heavy (it’s 1535kg, over 200kg more than a base Cayman) to be truly agile. It’s a fun but flawed car and it’s crying out for a sweeter engine.   Anything else I need to know?  Nissan will continue to roll out the Nismo brand across Europe and say that it stands for ‘accessible performance’. The worry is that these mild performance packs aren’t really special enough to create a halo brand at all. Nissan say that the Juke Nismo RS will be more hardcore and that the GT-R Nismo will be ‘mad’. We’ll see both before the end of 2013 and hope to finally drive a Nismo product that lives up to their incredible racing heritage. We’ll need a more extensive drive to prove it, but suspect that the most compelling Zed remains an entry-level car where it can take on GT86 instead of the likes of Cayman or BMW M135i.