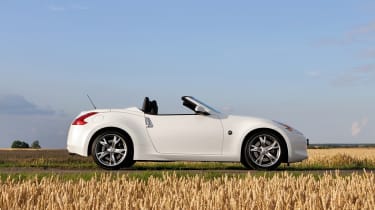 I seem to have unwittingly developed a specialism with my long-termers: rear-drive coupes and convertibles, usually with around 300bhp. So far I’ve been fortunate enough to tick the SLK, Z4, RX-8 and G37S off my list, but there was one more I was particularly keen to spend some serious time with: a 370Z, and specifically the Roadster version.

Why? Well, I’ve been a big fan of Nissan’s brawny Z-cars since racing a 350Z in a round of the Dunlop Sport Maxx Cup in 2007 (evo 113). I also like a good convertible, and last spring the 370Z Roadster proved itself to be just that by beating BMW’s Z4 35i and Audi’s TTS in an evo group test (issue 143). As the more-than-happy keeper of the very Z4 that was defeated, this result got me wondering: what would the Zed Roadster be like to live with? Even better than the Bee-Em? Now I’m going to get to find out.

OY11 PUH arrived in the height of the summer. It’s a GT Pack model (suede trim, leather seats with heating and cooling, eight-speaker Bose audio system, 19in alloys and cruise control, adding £3300) with Connect Premium (satnav, 9.3GB music hard-disk and a rear-view camera – £1550), the seven-speed paddleshift automatic gearbox (£1250), pearlescent Storm White paint (£550) and some 370Z-logo’d floor and boot mats (£136). Altogether this little lot takes the price of the convertible 370Z from £32,050 to £38,836, and that, impressively, is still less than the basic price of the Z4 35i, Mercedes SLK350 and Porsche Boxster S, all of which have at least 20bhp less power than the 326bhp Nissan.

Why the auto gearbox? A few reasons. Firstly, we’ve already lived with the manual in the coupe 370Z run by Henry Catchpole last year. Secondly, around 50 per cent of Zed Roadster buyers go auto. Thirdly, the Zed in the aforementioned group test was thus equipped, and it didn’t prevent it winning, despite the BMW having a slick manual ’box and the TTS a swift-shifting twin-clutcher. In fact the test team found the Nissan’s auto surprisingly likeable.

So, first impressions. I’ve not even covered 200 miles in the drop-top Zed yet, but it’s been a promising start. That big, gruff V6 sounds even bigger and gruffer without a roof, the gearbox does indeed appear to be a good ’un, and the suede-lined cabin is definitely a nice – and well-equipped – place to spend time. And it’s fantastic having open air above my head again. Yes, it’s early days yet, but I’ve got a feeling the Zed and I are going to get along just fine.