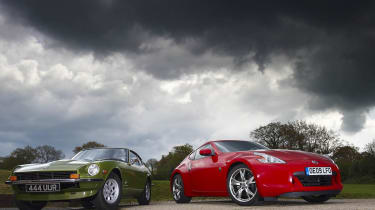 The late Viscount Tonypandy, the miner’s son who rose to become speaker of the House of Commons, once came to give a lecture at my school. I can’t honestly remember what he said, but I do remember him standing outside the hall as pupils and parents filed out into the evening air. As my father and I walked up to shake his hand and say thank you, he stopped us. He looked from me to my father and back again, then said in his gentle Welsh lilt, ‘Chapter one… and chapter two.’

Nearly 20 years later I found myself murmuring the same words as I dropped myself into Paul Brace’s superb, unrestored 240Z. You expect a certain family resemblance in lineages such as the 911 or even the M3, but for some reason I hadn’t expected such an uncanny likeness in the Zeds. From the outside there is an obvious long-bonnet/rear-drive stance to both 370 and 240, but it’s the details that are really striking. For example, I had assumed the rear three-quarter windows on the 370 were aping the current GT-R, yet there they are on the 40-year-old Datsun.

Inside, things get even more spooky. The three little dials on top of the dashboard are there, as are the familiar cowls around the big rev-counter and speedo. Turn around and you’ll see that the load area under the hatchback is identical, too, complete with the two suspension turrets poking up and robbing you of a bit of space.

Not everything is the same, obviously. In the 240 there’s a key rather than a button to spin the engine into life and the six cylinders are laid out in a line rather than a vee. There’s also a short lever down on the transmission tunnel to operate something called a ‘choke’.

The engine, rather like the 370’s, sounds more complex than a four-cylinder but not as distinctive or soulful as, say, a BMW six. However, with 151bhp at 5600rpm and 146lb ft at 4400rpm, the 1040kg Datsun bowls along very sweetly and the whole experience is brought alive by the incredibly thin wooden steering wheel, which makes the car feel delicate in your palms as soon as you grip it. By the time I returned the 240 to Paul I was smitten, and left looking at the 370 in a new light. I find it really rather heartening that a company as technologically forward thinking as Nissan has such a keen appreciation of the Zed’s heritage.