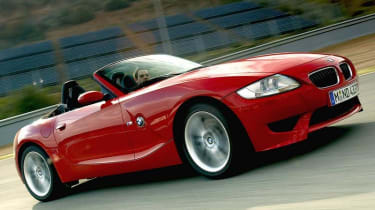 Can a car be too accomplished for its own good? It's a question that you sense may become more of an issue over the next few years. With tyre technology growing ever more sophisticated, the common use of constantly variable dampers and the massive advances in electronic control systems, you have to wonder if cars are going to be too grippy, too controlled and too efficient at the simple job of getting from A-to-B as quickly as possible to allow us to gain any enjoyment from extracting their full potential. Well, if the worst happens there will always be the new Z4 M Roadster to remind you just what it means when you put 338bhp through the rear wheels of a compact roadster...

It's not that the M Roadster isn't sophisticated - it's got all the abbreviations you'd expect of a modern BMW, from ABS to DSC via EBD, ASC and EDR. Thankfully, though, you'd never guess it when you're in the hot seat, metering out the massive performance served up by its searing straight-six.

The numbers are compelling. The 3.2-litre M Power engine produces exactly the same stats as it does in the sublime M3 (in the Z3 M a different exhaust system saw it lose a few bhp), which means 338bhp at a heady 7900rpm and 269lb ft at 4900rpm. Unfortunately, at 1485kg the M Roadster is just 85kg lighter than the four-seat M3. However, the claimed 0-62mph time is still just 5.0sec, enough to see off a Boxster S.

Perhaps more important than the bald performance figures is the lap time set at the Nurburgring. At 8min 15sec, the Z4 M is said to be significantly quicker than the bigger coupe from which it borrows its engine and gearbox, and the M Division engineers state that it's 'completely different from the old Z3 M, much more responsive and consistent'. Its predecessor always felt like a bit of a hot rod. It was great fun, but it wasn't the most polished product ever to leave the hallowed M works. The Z4 M Roadster is a more serious attempt at bringing the M Power ethos into the roadster market.

We're in south-western Spain, home of the fantastic Jerez race circuit and smooth, EU-funded roads that sweep across the varied landscape nearby. Within 100 yards or so of the jagged access road leading to the circuit you can see why BMW chose a route consisting mainly of smooth tarmac. The Z4 M feels very stiff. The front 225/45 ZR18 Continental tyres follow every rut or camber, and sharp ridges not only kick back through the steering, but also knock the car off line.

A Porsche Boxster would sail over similar terrain without so much as a shimmy, but the trade-off means that the Z4 M feels sharp, eager and uncompromisingly steely edged. The structure itself never even hints at a wobble.

The throttle response sends out a similarly extreme vibe: every tiny input is rewarded with soaring revs and a shove in the back. Hit the Sport button and the response is positively hyperactive. I left it alone, finding the Z4 M almost impossible to drive smoothly with Sport selected.

Okay, now for the bit where I moan about the brakes. It's predictable, I know, but it has to be said. The Roadster's set-up is borrowed from the M3 CSL, and despite huge cross-drilled discs (345mm at the front, 328mm at the rear) the initial bite feels a bit hollow, and after just 10 minutes of fast road driving they're squealing horribly. The single-piston callipers don't seem up to the job. To be fair they don't ever fade hugely, but they lack feel, progression and above all reassurance - something you really want on an unfamiliar road and with that straight-six screaming towards the red line.

That engine is, of course, the defining feature of the Z4 M. It has the same trebly, metallic shriek that makes the M3 so satisfying, only the noise is notched up a level and you feel more in touch with the engine's every movement, especially with the neat electric hood stowed away. To be honest some people might find it slightly too intrusive, but its angry cry complements the uncompromising chassis perfectly.

Speaking of which, the few poor surfaces that we encountered really upset the Z4 M's composure. It could turn out to be a handful on Britain's ancient, crumbling tarmac, but on smooth, sweeping roads it feels great. There's plenty of bite on turn-in and you can feel the car's balance shifting as you spot the exit and really get on the throttle, mild understeer bleeding away as you start to smear the rear rubber into the road.

However, it takes a little time to gain the confidence to really grab the Z4 M by the scruff of the neck, simply because the steering, although well-weighted, is essentially lacking in feel. And this despite the M Division ditching the regular Z4's electric power steering system for a more traditional hydraulic set-up.

Out on the fabulous Jerez circuit, the dull steering doesn't really dent your progress, but the Z4 M's quite pronounced understeer does. If you misjudge your entry speed it's not easy to rein it in and exit the corner cleanly. Through the slower corners particularly you have to work hard to keep it neat and tidy. The slick six-speed 'box works brilliantly, though, and the engine feels mighty, although strangely it seems to lack that last degree of fizz and crackle of recent M3s we've driven.

With experience you can negate the push with a big lift as you turn in. That gets the tail moving pretty quickly and you need to be decisive with your steering input to catch it. When you do, though, the six-cylinder's huge rev-range (there's useful power from 3000rpm to the cut-out at 8000rpm) means you can tease out slides for... well, forever. Or until a rear tyre shreds itself to pieces.

So, the Z4 M isn't perfect. You need to work at it to make it really sing, and the stiff ride and aggressive throttle response mean you never forget that you're driving something with a very bad attitude. But that's the appeal I suppose. If a Boxster S is too complete for you, and a TVR or Marcos too big a leap into the unknown, then you should be thinking very seriously about trying a Z4 M.