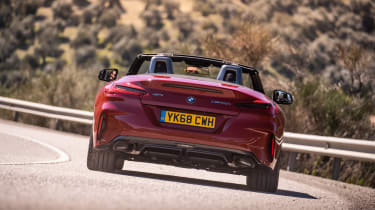 On first acquaintance the Z4 can seem like a far too refined proposition; it’s by no means a demanding car to drive and unless you delve into its various drive configurations you could be left with the impression that it’s a junior exec masquerading as a sporting roadster. Push it harder and it certainly improves, with further layers of ability, but it’s nowhere near as sharp a driving tool as a Boxster.

In part, this sophisticated nature is down to the Z4’s incredibly stiff structure – there’s nary a shimmer or a hint of flex, even when travelling over rough surfaces. The Sport and M Sport models (20i and 30i only) have less rubber on the road than the M40i and the Sport has a suspension set-up that’s slightly softer too. As a result, it’s the Sport model that seems to be the most playful, with steering that’s slightly more communicative, and while grip levels are slightly lower, it’s a more interactive machine than the arguably overtyred M40i. The Sport model rides better than the M Sport, but the latter is by no means too harsh for everyday driving.

The M40i adds a significant amount of kit to its armoury – 19-inch wheels with wider tyres, adaptive M dampers and a limited-slip differential. The grip it can generate is quite phenomenal, and while the variable sport steering (standard on all Z4s) is accurate and direct, it gives very little impression of what the front tyres are up to. The rear is similarly planted, but other than the scenery passing at a quicker rate of knots, there’s not a huge sensation of speed or involvement. 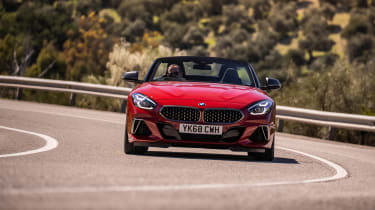 BMW says the M40i is faster than the M2 Competition round the Nürburgring and we can believe that, as it’s very composed when being driven quickly. There’s just a lack of joie de vivre in the way it goes about its business. Quick, undoubtedly, just not enthralling or involving.

You can add adaptive dampers and the limited-slip diff (30i only) to the 20i and 30i M Sport models, but it all comes as part of the M Sport Plus package which also brings the 19-inch wheels, but at £1950 it’s quite a lot extra to spend, especially as the 19s don’t improve the driving experience.