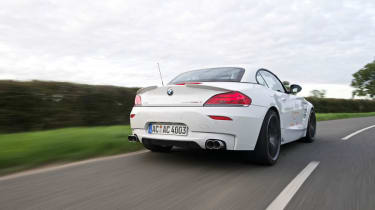 Have you ever seen a better-looking Z4? Me neither. The combination of lowered suspension and dark alloys transforms the demeanour of BMW’s roadster. It would look even cooler without the stickers, but this is AC Schnitzer’s demonstrator, and besides, there’s a suitably serious uplift in power to back up the appearance. Mind, as this is based on the new 335bhp Z4 sDrive 35is, it wasn’t exactly short of grunt in the first place.

As a demo car, this Z4 is fitted with just about everything in the catalogue. Body-wise, there’s a curvy carbonfibre splitter and, above that, an Aston-style set of aluminium spars; on the flanks there are new wing panels with SLR-like chrome strakes, and at the rear a pair of neat boot-lip winglets and a reworked valance.

Mechanically, the suspension is lowered by an inch and fitted with stiffer, rising-rate coil springs, a fatter rear anti-roll bar and re-tuned dampers. Those new, airy 19in forged rims help, too, minimising unsprung weight. The tyres are Conti Force Contacts – Continental’s first trackday tyre – and then there’s Schnitzer’s brake kit, with bigger discs front and rear and six- and four-pot calipers respectively.

The power of the twin-turbo straight-six is lifted to a mind-focusing 375bhp thanks solely to reworked engine electronics, while replacement exhaust back-boxes give the motor a louder, more appealing voice. And it doesn’t take long to appreciate that every last one of the claimed horses is there; the swell of torque in the mid-range is now mighty.

Better still, there’s a much more connected feel about the chassis, both in the sense that the car’s front and rear now work as a whole and that you can feel what’s going on at each corner. This is the first Z4 we’ve driven that feels fully exploitable. Yes, it’s a firm set-up, but the ride has hardly deteriorated compared with the stock car on its run-flat tyres.

There’s a more consistent weight and more realistic feel through the steering, and there’s no shortage of grip, either. In fact, there’s almost too much – those Contis hang on and on, so the engine is straining on full boost when the torque does overcome the traction. As soon as that happens with stability off, the boost is released and the rear tyres spin up even faster, snapping the car sideways. There’s great pleasure to be had in simply working within the ACS4’s considerable limits, though. There’s a clarity and focus to its dynamics, and you can feel the rear digging in and getting the torque onto the road. It’s an engaging, rewarding drive.

The total conversion as seen here adds a substantial £24,767 to the cost of a £44,220 Z4 35iS, making it a near-£70K car, though everything is available individually. A ‘driver’ pack, with the engine, suspension, brakes and wheels, would be £16,306. Still not cheap, but it turns the Z4 from a wannabe into a proper sports car, and a handsome one, too.