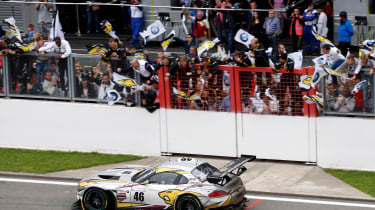 The number 5 Phoenix Racing R8 LMS of Christian Mamerow, Christopher Mies and Nicki Thiim crossed the line in third, two laps off the lead, securing Audi two of the three podium spots. But despite qualifying on pole and running the whole race on the same set of brake pads and discs, the Audi R8 LMS couldn’t match the BMW for overall race pace. 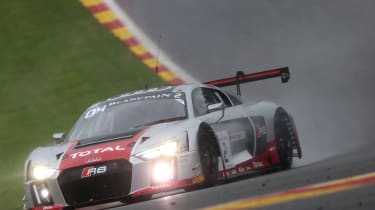 ‘It was once again an extremely exciting, extremely hard-fought race at this wonderful circuit – from the first lap to the last,’ commented Bas Leinders, team principal of Team Marc VDS. ‘Markus, Nick and Lukas were flawless and made the most of the potential of the BMW Z4 GT3 in every phase of the race. If everything comes together, you have a chance of winning – even in such a tough race.’

It was the AF Corse Ferrari 458 Italia of Pasin Lathouras, Stephane Lemeret, Gianmaria Bruni and A.P.Guidi that finished in fourth, five laps off the lead, ahead of the third highest ranked R8 LMS of Mike Rockenfeller, Andre Lotterer and Marcel Fassler. The Audi lost time undergoing repairs in the garage early Sunday morning after a high-speed spin at Eau Rouge, preventing its trio of Le Mans winning drivers from cementing a serious charge for the win. 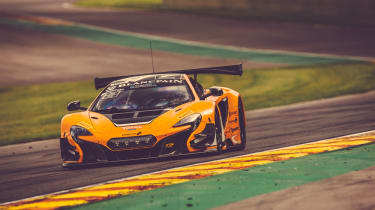 McLaren celebrated a finish for its new 650S GT3 as the highest placed car finished 18th under the control of Bruno Senna, Adrian Quaife Hobbs and Alvaro Parente. Fellow debutant, the Lamborghini Huracan GT3, wasn’t so successful – the remaining RT Grasser Racing Huracan retired after 364 laps with terminal crash damage. In total, 32 of the race’s 57 starters completed the distance.

With the BMW M6 GT3 due for arrival in 2016, the Z4 GT3’s Spa win marks one of its final races under full BMW factory support. ‘For a while we had five BMW Z4 GT3s in the top ten. That shows how competitive our car still is as it reaches the end of its life cycle,’ said Jens Marquardt, BMW Motorsport director. ‘It was a very special race for us, in many regards – it is 50 years since a BMW 1800 claimed the first of what is now 22 overall victories for BMW here.’