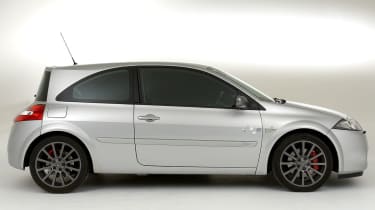 The Renaultsport Mégane suffers few common faults. In fact if you strike up a conversation with those in the know, they’ll tell you that the Renaultsport cars are more reliable than the standard range.

Buy one with a full history and no obvious signs of abuse and it’s unlikely that you’ll experience any mechanical heartache. There’s plenty of choice too, so don’t rush into buying the first car you see. Take your time, try a few, do a little extra research on the internet forums and you’ll be rewarded with a trouble-free ride.

Engine/exhaustThe turbocharged 2-litre unit is very strong and as long as it hasn’t been chipped or tuned it’s unlikely that you’ll have a problem with it. There have been no common faults reported with the turbo and as long as the motor has the cambelt and auxiliary belt replaced at the 72,000-mile mark it should be fine. It’s a hugely labour-intensive job that costs well over £1000 at a main dealer, but missing this work is a false economy as you are risking the belts snapping, wrapping themselves around the crank and trashing the motor. For that reason you should expect to see a large number of Méganes come onto the market as their mileages creep towards this point. Equally, prices for cars at this stage fall heavily until the work has been carried out, so ensure you bear this in mind when looking at early examples.

When starting the engine from cold it may feel a little lumpy for a minute or two, but this is normal and as long as it clears quickly there is nothing to worry about. The engine will run a lot better on higher octane fuel too; the forced induction system prefers to burn 98 RON and ‘pinking’ can occur if you use the cheaper stuff.

As usual, check all the fluid levels and the quality of the oil. Ensure it has been lubricated with the recommended grade of oil too – semi-synthetic 5w-30 or, on track, fully synthetic 10w-40. Then, as long as the service book comes with a complete collection of appropriate stamps, you should be home and dry.

The exhaust is a fairly simple system and it’s not uncommon to find a car that has had an aftermarket version fitted. This is usually the case on cars with over 40,000 miles under their wheels, because this is the point when the tail section usually requires replacing (around £200).

Gearbox/transmissionIf the shift feels a little sloppy then it will have been abused. Renault ’boxes aren’t the sweetest, but they have a relatively short throw and can be worked snappily around the gate. Use too much force, though – common with inexperienced trackday drivers – and the linkage can suffer.

The clutch should see you past 60,000 miles or more and the limited-slip differential fitted to the R26 has thus far proved to be well up to the workload demanded of it.

Brakes/tyres/wheelsThis is the one area where a little budgeting is required when calculating running costs. The overriding temptation to drive these cars hard all the time will make a dent in your bank account, but we reckon it’s worth it.

The brake pads are made from quite a hard material to ensure consistent performance and resistance to fade, and this tends to wear the Brembo discs faster than you might expect. Enthusiastic road use will see them worn out in around 20,000 miles, and if you enjoy regular track outings that figure will become smaller still.

Renewing the front discs and pads will cost around £530, and you may find that you require a new set of tyres at the same time. Expect just 10,000 miles from the front Michelins or Continentals if you’re heavy on the throttle.

The wheels are robust and scrapes can be easily and cheaply repaired, but alignment is critical, so if a wheel looks like it’s bumped a kerb it’s worth getting the set-up checked (£50).

SuspensionDespite the revisions and the constant stiffening of the suspension, its longevity hasn’t been compromised. Worn bushes on cars approaching 60,000 miles can be spotted by a knocking noise on bumpy roads, but otherwise everything should be fine.

Interior/electricsAs we’ve come to expect from Renaults, the interior of the Mégane is more functional than glamorous, but it all works beautifully and very few problems have been reported. The plastics scratch easily, but as long as a little care has been taken there should be very few other signs of wear and tear. The seats last well irrespective of whether they are covered in cloth or leather.

All the switchgear should operate cleanly. There have been a couple of instances where the electric window toggles have snapped off, but these are cheap and easy to replace. There were some weird electrical issues with earlier cars, such as the lights switching themselves on or even the engine starting itself, but these have all now been resolved and do not feature on the post-facelift model.

Bodywork/exhaustThe nose can be quite vulnerable to stone-chipping, while any tattiness is usually easy to spot, but otherwise there is little of concern here.

Back to Renaultsport Megane main page