Practical, reliable, fast and fun, you could be driving one of the greatest hot hatches of all time - so long as you find the right one 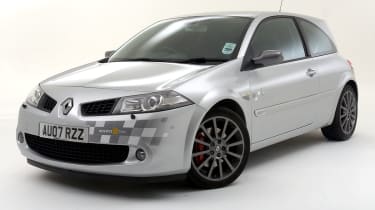 The Renaultsport Mégane suffered a difficult birth. To be honest, in its first incarnation it wasn’t the car we were either anticipating or hoping for. Soft responses and a gentle ride were not what we had come to expect from the team that had previously brought us the outstanding Clio 172/182 series and the outrageous mid-engined Clio V6.

When we were invited to the press launch of the Mégane 225 in Toulouse back in mid-2004, we took along a SEAT Leon Cupra R as our benchmark, and we were nothing short of shocked to see the new Renault soundly thrashed by its Spanish rival. It wasn’t that the 225 was a bad car – it looked sharp and packed a 222bhp turbocharged engine – but the messages were muddled. It was fast all right, but not feisty; it lacked attitude.

We shouldn’t have worried, though. There was a cracking chassis lurking underneath, it was just that the engineers in Dieppe had decided to release it stage by stage. The pinnacle of that work is the extraordinary R26.R, which last month almost swiped our 2008 Car of The Year title from the vastly more expensive pre-event favourites from Nissan, Porsche and Lamborghini.

Unfortunately, if you want one of these giant-slaying Méganes you’re probably already too late. The R26.R is so good it’s defying the credit crunch and selling like gateaux chauds. However, if you’re prepared to live without the roll cage and the carbonfibre bonnet you can grab yourself a second-hand bargain in the form of one of the models that led to the R26.R, namely the Trophy, the Cup, the absurdly over-titled Mégane Renaultsport 225 Renault F1 Team, or the 230 F1 Team R26, complete with limited-slip diff. All of them provide the bulk of the stripped-out road racer’s thrills but with a tad more practicality, while reliability is excellent and running costs are remarkably low. Here’s everything you need to know to bag a good ’un.

Evolution Renaultsport’s reaction to the mixed reviews received by the first 225 Megane were swift and decisive. The modified, limited-edition Trophy version arrived in the latter half of 2005 and was joined by the mechanically equal but not limited Cup. Alterations centered around the chassis, brakes and steering, and the differences between the two new variants boiled down to goodies alone: the Cup had fewer and therefore cost £18,600 compared to the £20K being asked for each of the 150 Trophys.

From a pure driving perspective it mattered little which of the pair you chose – the fizz was back. Stiffer suspension generated massively strong cornering grip without destroying the ride, and also added greater consistency, precision and poise. Meanwhile, the firmly weighted steering now offered more feedback and sharper reactions.

Playing on Fernando Alonso’s Formula 1 successes with its name, the 225 F1 landed midway through 2006. Based on the Cup version of the now facelifted Megane, it cost £900 more but came with extra kit worth £1450, including black gloss wheels, Recaro seats and new rear dampers (which became standard on all Cups by the end of the year) that took the Megane’s connectedness to the next level.

In November 2006 the 230 F1 R26 moved the bar higher still. It boasted just a smidge more horsepower, but that 227bhp was delivered to the tarmac via a limited-slip differential. There were further suspension tweaks and a slightly louder exhaust system, but it was the LSD that made the biggest impact. The car proved to be incredibly quick on the track (particularly in the wet) and on the road too. Unlike the Focus RS the diff wasn’t confused by bumps and thrown off-line, and for those who wanted a higher spec a ‘Lux’ version was also introduced, which included leather seats and keyless entry.

Although it’s about to be replaced with a new design, the Megane still looks current and sharp, which is surprising, as when it was launched we thought its unusual rear-end would quickly date and slide out of fashion.

Inside, the dash looks a little cheap, but the tone is right and everything is as perfectly located as you are in the excellent seats. This is important, because the cornering grip the Megane generates is incredibly strong – the front tyres lock into the tarmac and appear able to scuttle around corners at any speed you like.

There’s a precision to the Megane’s behaviour that runs through every dynamic aspect of its chassis. The ride is stiff and controlled yet never crashy, while the steering is well weighted and positive. Turn the wheel and the reaction at ground level is instant and sharp, and although the final notch of detail is missing from the steering’s feedback, it’s rarely distracted by bumps and cambers, even when giving it full beans at low speed.

Such is the progressiveness and cleanliness of the engine’s delivery, it’s often hard to tell that its power is boosted by forced air. It may not be the most aurally satisfying unit, but its responses are crisp and it’s a perfect match for the composure of the chassis, making for a seriously quick and exploitable hot hatch.   There’s an honesty to the Renaultsport Megane. The frill count may be low but it hits its targets.