Developed by a clean energy company, the Exige-based Nemesis claims 0-100mph in 8.5secs. 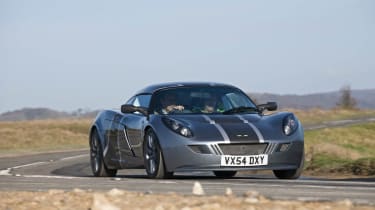 Issue 152 of evo goes on sale today and in it we interview Dale Vince, the entrepreneur behind Ecotricity. Besides developing eco-friendly forms of energy, he’s also built his own electric supercar, the Nemesis. And he let Harry Metcalfe drive it.

To save you guessing, the Nemesis is a heavily modified Lotus Exige with all the conventional mechanicals removed and replaced with a couple of 125kw (168bhp) electric motors, belt reduction drives and a 200-kilogram battery pack.

To get moving, you first power up the car by flicking a simple switch on the dash. All sorts of electronic whirring noises start filtering through to the cabin from behind you before the dials in front of you sparkle into life. Next; flick a second switch that sends some more strange noises to the cabin, wait for a couple of final clicks and you’re ready to roll. Select either ‘forward’ or ‘reverse’ on the simple gear selector between the seats and off you go.

As soon as you start rolling you’re hit with another wall of strange sounds. The Nemesis is like no other car, not even a Tesla. Vince reckons a lot of the transmission whine comes from the belt-driven reduction drives. That may be, but all I can say is the Nemesis is a whole lot noisier than any other electric car I’ve driven. As speed builds, other noises take over but you’re always aware you’re driving something very different to anything else on the road today.

Performance feels suitably brisk but not as aggressive as you’d expect from a car with a claimed 0-100mph time of 8.5secs. I didn’t really get an opportunity to give the Nemesis a proper workout but, even so, it was obvious there was plenty of promise here. One thing that is unusual is the Nemesis doesn’t have any re-gen when you brake as engineers felt it wasn’t workable on a rear-drive electric car.

Ecotricity’s owner, Vince Dale, is on hand to talk me round his baby and is concerned they’ve limited the torque a bit too much at lower speeds and that’s why it doesn’t feel quite as quick off the line as he’d like, he also wants to sort out the range indicator, which is proving inaccurate at the moment. Still, it’s only three weeks since the Nemesis hit the road for the first time, so these sorts of niggles are understandable. That’s why evo will be back for a full road test in the car in a few weeks time, once these early niggles are sorted.

Read the full interview with Dale Vince in this month’s evo, on sale now