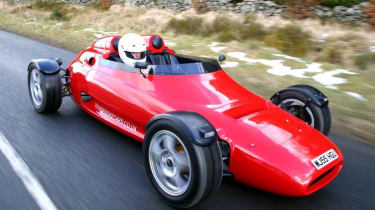 I remember road-testing the Brooke in its first incarnation. It appeared in the mid-'90s, not long after the Light Car Company's Rocket, and was clearly influenced by the Gordon Murray/Chris Craft design. However, the Brooke sat its passengers side-by-side rather than in tandem, and was powered by a longitudinally mounted car engine rather than a transverse motorbike engine. It showed potential, being small, light and low-slung, but it was clearly under-developed and soon faded from sight. Just half a dozen were sold, according to James Booker, MD of the new Brooke Cars and one of four partners who bought the rights to the project four years ago. He and technical development engineer James Rose (ex-MG Rover) have spent the last two years labouring away at their base in Honiton, Devon, getting the Brooke to its current state. It was a bigger job than they anticipated. 'There's not a single component that's interchangeable with the original,' says Booker. The only things carried over are the layout and the styling - the features that attracted them to the car in the first place. Looking around the Double R, there's an impressive attention to detail and an obvious pride in the way the car has been put together. Standard features include aero-section double wishbones, 280mm discs with aluminium callipers, adjustable Spax dampers and aluminium uprights. There are also Toyo 888R trackday-style tyres - 195/55 front, 215/50 rear - fitted to 15in OZ alloys. Beneath the engine cover the wiring, hoses and braided cables are neatly routed, while the square-tubed chassis is tidily welded by the same company now producing Caterham's spaceframes. The engine in this, the development car, is a 2.3-litre, 260bhp Cosworth in-line four, very similar to that in Caterham's CSR 260, but with Cosworth roller-barrel throttles and a baffled wet sump. Many affordable mid-engined sports cars take the easy route when it comes to selecting a drivetrain, opting for a ready-made package of a transverse engine and end-on gearbox from a front-drive car (examples include the Lotus Elise, MGF and Ariel Atom). The Brooke doesn't; the Cosworth engine is installed longitudinally and drives the rear wheels through a Renault-sourced five-speed transaxle. This results in better weight distribution, which should be a positive dynamic factor in a car weighing just 550kg. Step over the tub, slide down into the fixed, moulded seat (the bespoke pedal box adjusts for reach) and the low, curved aero-screen wraps around you (taller screens are offered). It's comfortable and the driving position is good. The Stack instrument pack (also standard) is set over to the left and angled towards you, there's a small, flat-based Momo wheel dead ahead, and on the right the stubby lever of the gearshift. You know some cars are well sorted almost as soon as you start to drive them, and it takes just a few hundred yards to appreciate that the boys at Brooke know what they're doing. It's the ride quality that impresses first; the Double R feels planted but pliant and resists being distracted by bumps and hollows. The steering is manageable when manoeuvring and retains a handy weighting at speed, while the Cosworth engine delivers abundant smooth power from low revs. The gearshift of mid-engined cars can be difficult to engineer, but the Brooke's rose-jointed linkage gives a short but positive action that you quickly trust, although selecting fifth works some odd arm muscles. There are plans to move the lever inboard slightly, and apparently I'm not the first to suggest that the wheel should be larger in diameter and fully round. You're so quickly at ease with the Brooke's dynamics that you're soon exploiting the Cossie engine's huge grunt, testing the excellent traction of the rear tyres and leaning on the substantial grip of the fronts. The steering effort rises after a certain amount of lock, which a bigger wheel would lessen, helping the car to flow even more naturally. You don't have to wring the Brooke's neck to be entertained, though. It's easy to imagine the Double R in a lower state of tune for those who simply want to enjoy the low-slung, open-air experience and unique outlook. Fully built road versions start at £27,995 for the 200bhp model, which looks pretty good value considering the standard kit. This 260 is £32K and there's a 300 on the books at £37K. Race and trackday versions start from less than £24K.

The team at Brooke is already planning its next move. Apparently it would be quite simple to drop a coupe body onto the Double R and turn it into a mini-GT like the Lotus Exige. 'We're quite ambitious,' says Rose. Combine that with a talent for thorough engineering and impressive dynamic tuning and big things can happen. I've a feeling that Brooke Cars will stay on the scene this time.