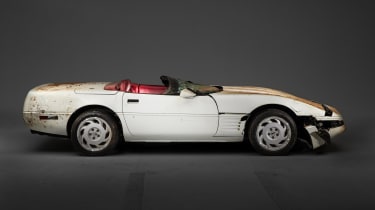 An important version of one of the world’s most iconic performance cars is to gain a new lease of life following damage it sustained in a sinkhole 16 months ago.

The one millionth Chevrolet Corvette, a white 1992 convertible, was one of eight historic Corvette models that plunged into a hole beneath the National Corvette Museum in Bowling Green, Kentucky, in February 2014.

Museum staff were alerted by their security company when the alarm was activated one morning – arriving at the museum to find 45 by 60-foot hole had opened beneath the museum’s Skydome area. The hole reached as deep as 30 feet below ground level.

Restoring the car is no easy task. Large components damaged in the fall can’t simply be replaced without erasing the car’s historical signficance and appearance, but parts of the car were severely damaged under the rubble. 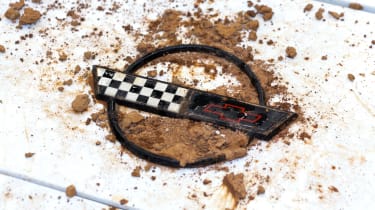 It’s the second car being restored by Chevrolet itself following the incident. The first, a Corvette ZR1 prototype from 2009, suffered only slightly and was restored last autumn. Another, a 1962 Corvette, is being restored by the museum.

The remaining cars, including a 1984 PPG pace car, and the 1.5 millionth Corvette from 2009, will be displayed at the museum in their damaged state. In a mark of true American solidarity and entrepreneurship, the cars will become part of a sinkhole-themed display at the museum.

Bowling Green, where the museum is located, is an important location in the Corvette’s history, being the place where the current C7-generation Corvette is assembled.