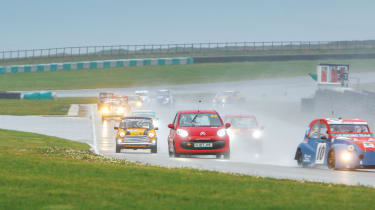 I was pretty disparaging when my mum said she’d decided to spend a significant amount of money on a sodding camper van. I couldn’t fathom why she’d want to buy something so slow and dull when she could be buying something fun and/or fast and a hotel room. But now, as the wind seems to be trying its hardest to relocate the entire Irish Sea onto Anglesey Circuit and I’m cocooned by steel rather than wispy nylon sheets, I’m incredibly grateful. Because not only did she not listen to me, she has actually let me borrow it.

Despite my sumptuous accommodation I still can’t sleep. The wind is rocking the van, not in a calm send-you-to-sleep manner, but in an erratic way like it’s trying to shake me awake. That isn’t the reason I can’t fall asleep, however; it’s because I have just completed my first two stints of race qualifying, ever. One in daylight, one at night. I really need the sleep, too, because tomorrow I am going to compete in a 24-hour endurance race. My first race. Ever.

I’ll be racing in the experimental class. That sounds far more glamorous than it actually is, because my car will be an almost completely standard Citroën C1. For years the cheapest way into motorsport has been to race a Citroën 2CV, but as the cars and the parts needed to keep them competitive get rarer, they have increased in value, making 2CV racing an expensive hobby. An alternative was clearly needed. Enter the C1. It’s plentiful, cheap to buy and, because the regulations permit only minimal modifications, inexpensive and easy to turn into a racing car. But the members of the Classic 2CV Racing Club need to see the newer Citroën in action before they’ll consider allowing a C1 class in their club, and the annual 24-hour 2CV race at Anglesey will be its first competitive outing. 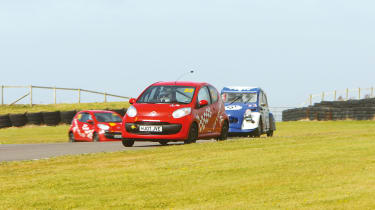 Before today I was incredibly nervous. I know, I know, it’s just a C1, but I’d tried the car at Blyton Park a few weeks earlier and it isn’t the benign little hatchback you might imagine; it’s surprisingly challenging to drive. One of the alterations that’s been made to the car, other than the obligatory safety mods, is revised front geometry and stiffer, lower springs. This makes the C1 extremely twitchy. Carry just slightly too much speed into a corner and the car will flick sideways. Great fun, but not quick. Too slow and the modest power (68bhp) means you barely make any progress. Balancing the C1 on the knife-edge between barrelling along at pace and instant oversteer is not easy. Of the five or so laps I did at Blyton, I didn’t complete one without a speed-sapping error. If I couldn’t maintain consistency for an entire lap at Blyton, how was I going to cope under qualifying conditions in the dark with Welsh weather? And then driving an entire 24-hour race?

I am therefore relieved when I first arrive at Anglesey and am told by Caryl Wills, the man who transformed this C1 into a racing car, that he’s softened it off since I last drove it. But I shouldn’t be so eager to relax: at the first corner on damp tarmac the C1 behaves just like it did at Blyton. Bugger! Well at least I’ll be having fun even if I don’t string together just one fast lap over the entire weekend.

As daylight qualifying ends and I pull into the pits, I’m met with encouraging noises from the other drivers on my team: Louis Tyson, Jason Baron and Graham Thomas. My times suggest I didn’t do too badly. The night session goes even better, helped by the drying track. We put our C1 seventh on the grid, just ahead of the only other C1. 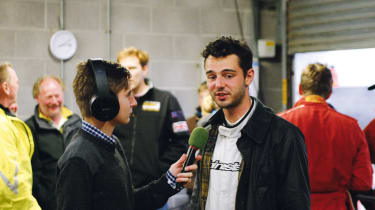 We decide to let Louis start the race. He is the most experienced racer on the team so is likely to cope better when surrounded by 33 other cars. The tactics work and as Louis finishes his first stint we’re up into fifth and still ahead of the other C1. I’m up next, and all I need to do is maintain a good pace to keep our position.

That’s not as easy as it sounds. The track is mostly dry, but the car still requires a large proportion of my attention to keep me from making silly mistakes. The rest of my focus is on the other cars on the circuit. Thankfully the C1 is quicker than the classic 2CVs, and the classic Minis with which this 24-hour event is shared, but the composite-bodied, BMW-motorbike-engined 2CV lookalikes are much faster. However, every time I encounter any other car on the circuit I start to lose time. And if I come across a pack of them, I get sucked into the middle of the group before eventually being set free after a couple of corners. Soon enough I see the other C1 in my mirrors. Every time I struggle to pass a backmarker, it gets closer and closer.

I make a mistake at Peel, the corner before the downhill Corkscrew section, and lose our position to the number 21 C1. I need to get that place back. I have completely forgotten I am in an endurance race: all I want is to be in front of that C1. Each time I try to pass it, the move compromises my line into the next corner, but I eventually get lucky at Peel and overtake my nemesis down the inside.

To stay in front I know I need to be bold through traffic so as not to fritter away my pace. I hold my line on the inside for the last corner, ready to pass a bunch of slower cars. I dive for the apex but so does the 2CV next to me and we collide. It isn’t a big crash, and the damage to both cars is minor, but I back out and the C1 behind me slithers past and pulls ahead. 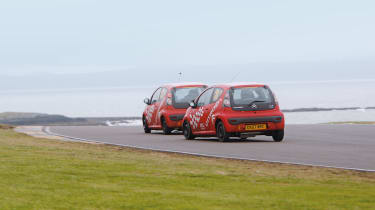 Despite the bump I’ve learnt how to deal with slower cars and am able to stay with the leading C1. In fact I’m gaining on him. We’re closely matched around most of the circuit, but I’m a little faster after the second corner, The Banking, and that sets me up well for the long flat-out section all the way through Church up to Rocket. But my advantage is so slight I can’t gain enough speed to actually pass. So I sit tight for a few laps and follow number 21. For the first time in an hour I start to behave like I’m in an endurance race. Then I get The Banking just right: enough speed for the engine to stay buzzing, but not so fast that I lose momentum in a slide. The flat-out section seems to take ages, but as every second passes I edge ahead and eventually get myself in front just before we brake for Rocket. I keep my cool through the technical section of the lap, and with no back markers to get in my way I manage to stay in front.

At the end of my first stint I feel as if I have witnessed some of the closest, most tense and most exhilarating racing ever. The fact that I was part of it may have skewed my opinion slightly, but the reaction in the C1 camp would suggest that it wasn’t too bad to watch from the sidelines, either. If the race were to end here I’d be happy, but we’ve still got 20 hours to go.

I emerge from my plush camper van refreshed for my next stint just as our C1 grinds to a halt after Turn 1. The car is towed back to the pits and Louis admits he changed down into first rather than third. The mechanics whip out the spark plugs to compression test the engine only to discover one has disintegrated. A lack of compression on all three cylinders suggests the engine is well and truly dead. We’re out of the race… 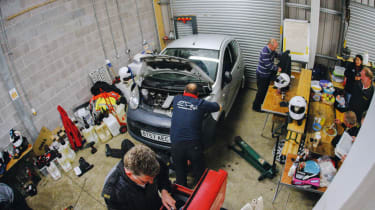 But our mechanics aren’t so easily deterred. They set about swapping the engine for one out of another C1 they’ve brought along for spares. Two hours later, our race car has a new working engine.

A dark, sodden Anglesey should be daunting. But in the wet the C1s are absolutely the quickest things on the track. My rival is faster than I am, though, and soon passes me. As I tuck in behind it’s clear why I’m so much slower: the racing line in the wet is very different. At least I’m learning.

The rest of my stint continues without drama and so does most of the race. But in the last hour the new engine all but gives up. Graham brings the car into the pits and we decide to keep it there until the last possible moment and then complete the final lap. The marshals let us know when they’re about to drop the chequered flag and Graham nurses our clattering car out onto the circuit. It creeps down the back straight so slowly that I doubt it will make it up the hill to Rocket. It does, and Graham trundles over the line just moments after our rival C1 finishes third, having performed faultlessly throughout the race.

I always thought racing would be fun no matter what car you did it in, and the little C1 proves the point. The enjoyment of the close, respectful, top-quality racing between these puny cars is only matched by just how demanding and deliriously fun they are to drive. The 2CV has a worthy racing successor. 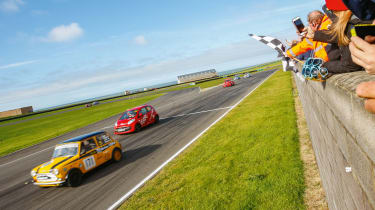