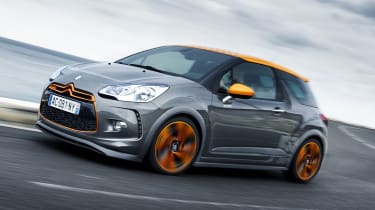 We already love the DS3 (here’s the first drive), so the news that Citroen are going to be showing a 197bhp DS3 Racing at the Geneva motor show in ten days time was particularly well received around these parts.  It uses an uprated version of the 154bhp turbocharged 1.6-litre THP engine that appears in the DS3 Sport (as well as the Mini Cooper S and various Peugeots), and with 203lb ft of torque to partner that power figure we reckon it should be good for 0-60mph in 6.5secs.  The main catch is that it’s a limited edition run of 1000 cars, but they have been developed by Citroen Racing. Yes, such a department does exist – it runs Loeb’s WRC C4 (video of evo in that here). It sounds like they’ve done a proper job on the suspension, too – stiffer springs, adapted shocks, tracks widened by 30mm, body dropped by 15mm and the steering modified to get the best from the wider tyres.  It’s clearly aimed at the Mini Cooper S JCW and Renaultsport Clio 200 Cup, and we anticipate that it’ll cost nigh-on £20k when it comes to the UK.  Click here to peruse the rest of the Geneva show highlights Read John Simister’s first drive of the Citroen DS3 1.6 THP