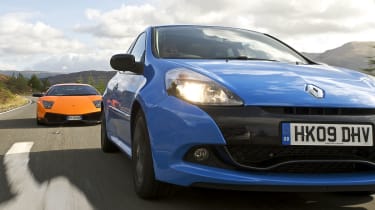 The 200 Cup moves the hottest Clio into the zone that made the more heavily evolved editions of the previous generation so magical. Should the Focus RS be afraid? Mildly concerned at the very least.

Not at the numbers – 197bhp, tweaked torque and shorter intermediate gearing go a long way in the little Renault, but the only car it will be overtaking on the straights is the MX-5. Rather, it’s the way a brilliant chassis preserves the speed generated by that game, high-revving 2-litre four-pot motor. Expect to see the Clio’s nose filling the rear-view mirrors of some vastly more expensive and powerful machinery in the coming pages. All right, the ride is very firm, but in a good way: no harshness or jarring but an almost Elise-like poise that combines extremely precise control with suppleness. Just as with the Mégane R26.R, it feels special within the first few hundred metres.

But it’s when the roads on Skye start asking questions that might cool the pace of some contenders that the Cup should really shine. It’s a car that refuses to be fazed, continuing to cover the ground at an undiminished lick while maintaining a beautifully judged balance between sheer speed across the ground and throttle-induced entertainment. It has a lithe, sinewy athleticism that manages to carry seemingly implausible speed into and out of corners without wasting energy but, if you want to play games with the throttle, the Cup will oblige with just the right degree of rear-end mobility. A real contender.

Position five verdictThe fact that the £16K Clio comes in fifth probably doesn’t come as a surprise but the simple fact that it made the cut shows that it’s one very special little car. Vivian sums it up perfectly. ‘We tend not to talk about ‘fun’ when we’re in analytical mode but that’s what the 200 Cup delivers in spades. It’s such a cohesive package; there just seems the right amount of everything and everything works in perfect harmony.’

‘The roads today haven’t helped and I do think it is slightly over-awed in this company,’ says Harris, ‘but it’s still, for the money, staggering, isn’t it?’ Two of us reckon it might have done even better had it been the more supple non-Cup chassis…