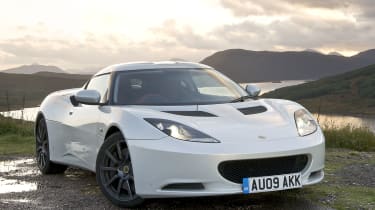 Hats off to Lotus. With some aluminium, some glue, a pal in the Toyota parts department and a budget that wouldn’t cover the rear cupholder assembly on the 7-series, it has built something that can out-drive a Cayman. Other car companies have spent hundreds of millions singularly failing to achieve that goal, and yet little Lotus manages it without apparently breaking sweat.

The Evora is something quite unlike any other sports car on sale in the UK in that it refuses to acknowledge the sacrifices and compromises that have somehow become acceptable in recent years. At the centre of this lies the relationship between ride, steering and roadholding – traditional areas of excellence for Lotus.

On UK roads, no other sports car isolates its occupants from the road surface like the Evora. It would be tempting to compare its supple, level ride to that of an executive saloon, the only trouble with that definition being this: it’s hard to think of an executive saloon that rides as well as an Evora. This car reminds us that comfort and enjoyment are mutually compatible: that the predilection for hard springs and unyielding dampers is, was, and always will be a nonsense.

There is only one question mark hanging over the new Lotus: is its powertrain worthy of what is otherwise a world-class package? We certainly thought so back in June when it beat its closest rival, the Cayman S. Now it needs to topple, among others, the GT3. Should be worth watching.

ECOTY Winner: Lotus EvoraSo the Lotus Evora is our Car of the Year 2009. It’s not flawless, it’s not the most exciting car to look at, but it’s a magical thing across the ground, deft like an Elise, with exceptional poise and feel. What was telling for me was that, getting into it after any of the other finalists, it was even better than I remembered: a bit smoother, a bit quicker and even sweeter dynamically, too. It’s a beguiling car.

Vivian was charmed. ‘Once in a while a car comes along that forces you to disassemble your critical apparatus and put it back together in such a way that it can accommodate a new paradigm. Last year it was the Nissan GT-R, this year it’s the Evora – a car of such stunning dynamic prowess that not even a lousy gearchange, a less-than-inspirational Toyota engine, a shape with some dubious angles and joke rear seats can dent the achievement. A quite brilliant car and worthy winner.’

The last word goes to Marriage: ‘The more I drove it the more I got into it. You never tire of all these lovely messages being gently fed back to you. It’s not as insistent, as demanding of your attention as the GT3, and that makes it a great car to live with and drive every day. It’s a huge achievement, the biggest of 2009.’