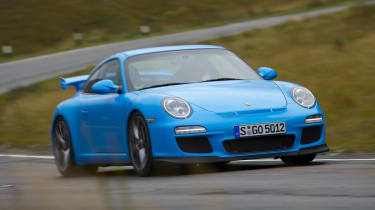 Those of you who like a flutter probably won’t be too impressed by the odds being offered on this particular machine. The GT3 has done so much winning in the last ten years (’99, ’03, ’07) we’ve been forced to raid the NASCAR Commentator’s Book of Made-up Words to summarise its achievements. Depending on your preference it’s either the winningest or most winsome eCoty machine of all time.

New for 2009 is the second-generation 997 GT3, and with it comes more of everything – which sadly includes a little extra weight. The motor – now 3.8 litres – is still based on the GT1 block and does without the direct injection of the latest Carrera. Power is up to 429bhp and pretty much every aspect of the mechanical and aero package has been tweaked by the fetishists, sorry engineers, at Porsche Motorsport.

But in amongst the claims of a five-fold increase in downforce over the last GT3 and a top speed north of 190mph, the big questions being asked of the GT3 are now more subjective: how does it feel, does it still offer that extra magic over a base Carrera?

Of course it does. There were a few reservations when it took on the Aston V12, R8 V10 and ZR1 at the Nordschelife earlier this year (133), but it still gave some much more expensive opposition a fair kicking.

There’s a hint of Usain Bolt about the GT3. We expect so much, and rightly so. The form book suggests it can only be denied outright victory by something quite exceptional.…

Position two verdictSo, what’s it to be? GT3 or Evora? Two quite different cars, two quite different experiences. Exquisite evolution or exceptional achievement from a clean sheet? When the final votes came in, it became clear that most of us had found them very hard to separate. The GT3 delivers higher highs and lower lows, the Evora everyday, every-journey brilliance. When the scores were tallied up, the GT3 lost out by half a point.