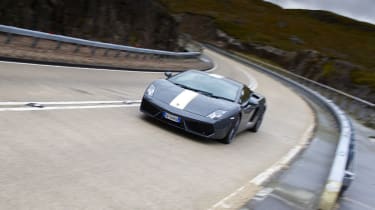 So what exactly is the Balboni all about? You already know the story-line: perennial test driver and general Sant’Agata legend Valentino Balboni decides to call it a day. In return his bosses offer him the ultimate epitaph: a car to his own specification. The management redefine the meaning of the phrase ‘anything’ when Valentino draws up plans for a twin-turbo 1000bhp LM002, after which he turns to the Gallardo. Allegedly.

On paper what we have here is a two-wheel-drive version of the LP560-4, with around 10bhp less and weighing 30kg less. Hardly seismic changes, and, aside from the odd silly sticker, the cosmetics are the same too. There’s no claimed motorsport homologation connection either: this is just a different type of Gallardo, not one with a track bias or vastly altered performance.

Don’t be fooled: this is a very different driving experience to an LP560-4 and entirely in keeping with what should be expected of the first rear-driven Lambo in a decade. Anyone who ever wanted to know how a Gallardo would steer unshackled from the disruptive influence of front driveshafts would be suitably impressed. The lack of inertia in the powertrain needs to be felt to be believed.

This is Lambo doing simple food with the best ingredients. No sport buttons, no paddles, no nonsense – just one of the great road-car motors and a new-found appetite for slip angles. If only they’d actually given one to Valentino.

Non top-five verdictSeveral people had the Balboni in their top five, but it was always fighting the enemy within. The Gallardo sounded fabulous but the SV sounded more fabulous. The Gallardo looked sensational but the SV looked more sensational. Roger Green observed that ‘The two Lambos are so different, you even put the seatbelt on from opposite sides.’ Light steering plays heavy, rear-wheel drive plays four-wheel drive, conventional doors play scissor doors… I could go on. We love the Balboni and the conversion to rear-wheel drive is fantastic, but by the time we hit the sack we know that it won’t be one of the final five heading off in the morning…