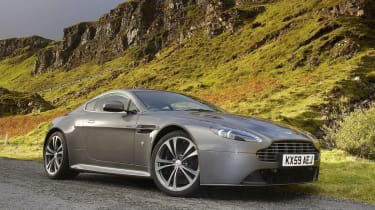 Born of the simplest performance car recipe known to humankind (take the biggest engine and bung it in the smallest car), the V12 Vantage was always going to be an event.

Okay, the insane 550bhp GT2 engine didn’t make it to the production stage, but anyone who’s nailed a standard 420bhp V8 Vantage will understand that the prospect of another 90bhp and a heap more torque is pretty amusing.

Like the Balboni, this isn’t Aston’s answer to the whole RS/Scuderia/Superleggera theme. Yes, it’s a very high-performance road car that can be used, and will excel, on the track. But cows have died to fashion its interior, a sat-nav screen still unfolds from the dashboard and a gentleman can still listen to Test Match Special on the wireless. This is still, after all, an Aston Martin – even if the new wheels have a whiff of the Ripspeed catalogue about them.

Why it has six forward gears is anyone’s guess –four would suffice. With 420lb ft dragging such a dainty aluminium structure, it can pull away in third and obliterate hot hatches from 1000rpm in fourth. It loves to work at high crank-speeds too, and the noise is, shall we say, expensive sounding.

Just as well, because the V12 Vantage ain’t cheap. But then price didn’t stop it beating Audi’s R8 V10 and the mighty Corvette ZR1 when we brought them together earlier this year (issue 133), so we have high expectations.

Non top-five verdictAnd so we come to the point where we put a blindfold on John Simister, march him out to a post at dawn and pelt him with over-ripe fruit. The V12 Vantage is the best Aston for many a year. Brimming with character, huge pace and looks that just get better and better, many of us wanted the Vantage in the top five. Simi didn’t though and torpedoed it by putting it eleventh. Ouch...