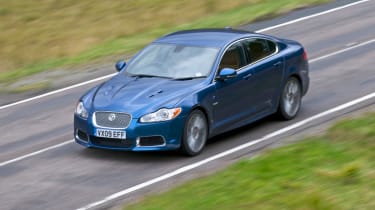 BMW may have invented the supercar-fast executive saloon with the M5 but the best exponent of the concept in 2009 comes from Jaguar. The XFR, though, is no M5 copy. Jaguar’s fastest ever saloon would never be so crass. A conundrum, yes. To satisfy the disparate demands of the brief, it would have to be both aggressive and reserved, overtly powerful yet gracefully understated, less flash than a BMW but more fascinating than a Merc.

In fact, Jaguar may yet have created the perfect foil to the M5’s maximum attack, all-bases-covered way of doing things. It’s the saloon that has it all – including a mighty, all-new, supercharged 5-litre V8 engine with power and torque outputs that singe the paper on which they’re printed, continuously variable damping and a trick, electronic differential. All of its 503bhp and 461lb ft are accessible and useable. Toe to the floor, the XFR feels almost shockingly rapid, the usually subdued, soft-edged V8 burble acquiring a nape-tingling edge and resonant bellow as the acceleration builds and builds. Meanwhile, the six-speed auto trades absolutely none of its sublime smoothness for electrifying shift speed at maximum chat, which is just what you need when you’re calling the shots via the soft-touch shifters behind the wheel.

It’s long been the case that Jaguar has preferred the notion of quietly assertive to down’n’dirty but, for this year’s eCoty, some of us are hoping it will let the gloves and gum-shield drop to the floor.

Non top-five verdictJaguar should be very proud of the XFR. Somehow the gloriously fast saloon has managed to mix it with supercars and not feel awkwardly out of place. It manages to be hugely entertaining on a B-road yet not forget its main purpose in life when you want to waft up the M74. ‘Probably the most accomplished, polished contender of all,’ says Vivian. But still not enough to make it in our top five.