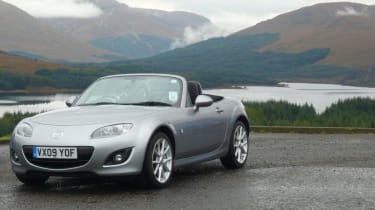 The genius of the MX-5 is that it has been designed to massage the mild instinct for adventure and fun behind the wheel shared by millions without sacrificing the comfort and convenience taken for granted in ‘normal’ cars. Which makes it easy to underestimate.

And that would be a mistake. All right, it hasn’t always been brilliant. Mazda’s first stab at the slightly larger and more muscular third-generation car simply lost the handling plot. It was as if the front and rear suspension had been developed separately by people who didn’t like driving or each other. But after a chassis rethink and the addition of a slippy diff we’re back with the original script, as John Barker discovered when he drove it on the (re)launch in issue 129. If you want to be reminded how deliciously pure and simple the pleasures of a light car with a sweet four-pot twin-cam in the nose driving the rear wheels via a flick-wrist gearbox can be, the MX-5 is, once again, a delightful wake-up call for the seat of your pants.

It has flingability and a nifty power-to-weight ratio. It has delicious steering that combines fine precision with perfect weighting. It turns in crisply, grips more than amply and has a gloriously adjustable cornering balance. The precise gate and short throw of its gearchange are a joy, too. The MX-5 vibe is consistently engaging. It’s the place input and feedback are benignly synchronised. Watch out for the MX-5; it may be a kitten by comparison with virtually all its eCoty rivals, but the way it does what it does is sublime.

Non top-five verdictThat the Mazda feels outgunned and overawed on the big roads was to be expected, but the fact it never quite comes alive on the twistier stuff wasn’t. Blame the wrong spec perhaps, but the MX-5 never moved us with quite the subtlety and sweetness of the best of its predecessors.

Share this on TwitterShare this on FacebookEmail
Go Back to10. Ferrari California
Continue Reading13. Artega GT