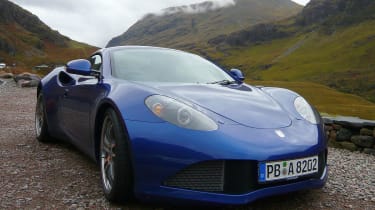 Could the Artega GT, rather than the Porsche Cayman, be the Evora’s true nemesis? Voices from the blogosphere have even suggested that the great (pearlescent) white hope from Hethel should look more like this compact, two-seater coupe from the small town of Delbrück in Germany.

The respective design philosophies overlap almost exactly. Like the Lotus, the Artega is built around an aluminium tub cloaked in a plastic body and powered by an off-the-shelf transverse mid-mounted V6. But the constituent parts are just that bit sexier, the powertrain (complete with DSG double-clutch transmission – no manual option) is lifted from the VW Passat R36 and pumps out 296bhp, 20 more than the Evora’s V6, while the body panels are made out of the same carbon composite material as the McLaren MP4-12C’s, so it weighs less, too.

In short, it has a lot going for it – not least a stunning shape fashioned by erstwhile Aston design ace Henrik Fisker, engineering input from former Porsche technical designer Hardy Essig and everything that stems from the financial and technical backing of motor industry electronic systems supplier Paragon AG (including its CEO, Klaus Dieter Frers, previously head of Rolls-Royce). It seems entirely possible some major egos in the sports car sector may have to run for cover. And if the performance and handling we experienced in Germany (137) are replicated in Skye, that might apply to some of this year’s eCoty contenders, too. Even the Evora.

Non top-five verdictWhen the scores are totted up, the Artega is the first to miss the cut, though it goes back to Germany with its head held high – this is one of the highest scoring eCotys ever and just one point covers the bottom four. The GT has been let down by two things: firstly, the fact that the electrics on this first right-hand-drive example are playing up, and secondly, because there’s another car here that does similar things rather better…