The Chevrolet Corvette Stingray gets three SEMA specials, including a homage to Playstation game Gran Turismo 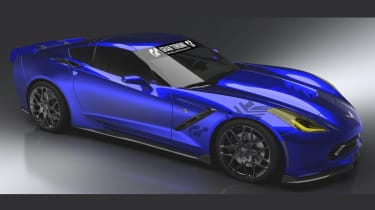 Most exciting is the Corvette Stingray Gran Turismo concept, which pays tribute to the Playstation driving game’s 15th birthday. The GT ‘Vette gets a cosmetic overhaul, with custom paint, yellow-tinted headlights and carbonfibre accoutrements, including a rear wing, bonnet and front splitter.

Inside, the sports seats get racing harnesses and the steering wheel is flat-bottomed. A cosmetic overhaul is all this is, though, with the new C7 Stingray’s 454bhp 6.2-litre V8 engine unchanged, still driving the rear wheels through a seven-speed manual gearbox.

The other two concepts are the Stingray Coupe Pacific concept, a Torch Red ‘Vette with the Z51 performance pack (dry-sump oiling system, enhance cooling, electronic limited-slip differential, tweaked gear ratios), black stripes and satin black alloy wheels, and the Convertible Atlantic concept, painted Blade Silver and said to display the styling sophistication of a private jet. It gets 19in chrome wheels and a six-speed automatic gearbox, defining it as a cruiser’s Corvette rather than a car enthusiast’s.