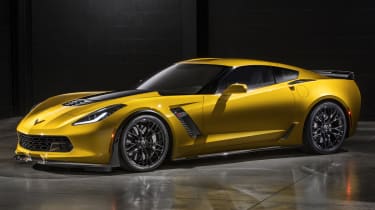 Full details and performance details of the new Chevrolet Corvette Z06 have been fully released – and is now claimed to be producing 650bhp and 650lb ft of torque. This puts it at the top of the tree in terms of current US series production cars, and the most powerful car GM has ever produced.

Chevrolet calls the new Corvette Z06 its most track-focused Corvette model ever, yet a possible contradiction was revealed in the form of the Z06 Convertible at the 2014 New York motor show. The good news, though, is that it apparently weighs exactly the same as its hard-top sibling, unusual for a convertible car with its inevitable extra chassis strengthening.

No definitive performance or fuel economy figures have been announced yet, but Chevrolet has confirmed that for there'll be a standard seven-speed manual gearbox, with an eight-speed automatic optional.

Suspension is largely the same as the standard C7 Corvette Stingray, featuring double-wishbone suspension all-round. Magnetic Selective Ride Control is standard on the Z06, allowing three stages of stiffness. This, along with the launch control and the electronically controlled limited slip diff can be selected via the Driver Mode Selector. The company says that (in coupe form, at least) with the track-focused Z07 performance pack, the Z06 delivers faster lap times than 2013 Corvette ZR1.

With added vents and cooling ducts, the Corvette’s extra performance has been carefully implemented for reliable track driving, with the changes meaning a 50 per cent increase in cooling. Track-oriented Michelin Pilot Sport Cup 2 tyres are fitted as standard, and to deal with heavy use on track, the Z06 gets six-pot front and four-pot rear brake calipers.

It is not yet known weather the Z06 Corvette is coming to Europe officially, but the Stingray model is on sale here now, priced at £61,495. Therefore harder cored versions are more than likely to top £80,000.