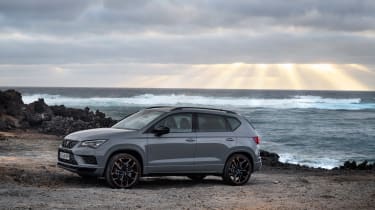 Cupra, performance offshoot of SEAT, has revealed a limited edition of its Ateca SUV creatively named the Limited Edition. Constituting mostly aesthetic updates, the Cupra Ateca Limited Edition will be limited to just 100 units in the UK, 20 of which will be fitted with an Akrapovic exhaust system.

Under the bonnet, the Cupra Ateca is largely unchanged from standard models, pairing a 2-litre turbocharged four-cylinder engine with a seven-speed dual-clutch automatic and all-wheel drive system. Power is rated at 296bhp as standard, but like the Leon Cupra R estate can be fitted with an optional Abt power pack, lifting power to 345bhp. The two variants have an identical 4.9sec 0-62mph time, but the Abt version will keep going to an unlimited 158mph, 6mph more than the standard model. 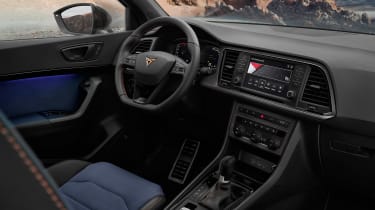 The Cupra Ateca Limited Edition shares a similar aesthetic to the Cupra R Estate, pairing one of two shades of grey with copper detailing on the wheels and exterior badging. To complement the Cupra’s aggressive aesthetic, the mirror caps, roof spoiler and Cupra lettering are all finished in a contrasting carbonfibre finish with a thread of copper integrated into the weave.

Also new for the limited edition are a fresh set of 20-inch copper-detailed wheels, an inch bigger than standard, behind which sit a bigger set of Brembo brakes. The optional £3040 Akrapovic exhaust system is distinguished by its four exhaust outlets, which differ from the smaller oval units of the standard car. As well as increasing the exhaust noise, it also reduces the exhaust system weight by 7kg. 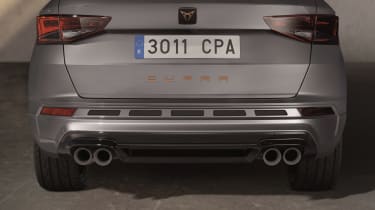 Inside, Cupra has paired copper stitching with blue alcantara inserts on new bucket seats, but the interior is otherwise unchanged – although one notable exception is the Leon Cupra R’s alcantara steering wheel, a distinctive and tactile element in the otherwise aging interior.

Prices start from £42,120 for the Limited Edition, while models fitted the aforementioned Akrapovic exhaust system lift that to £45,160. The optional Abt power pack is fitted at UK dealers, rather than the factory, but doesn’t affect the standard manufacturer warranty and only costs an extra £500. 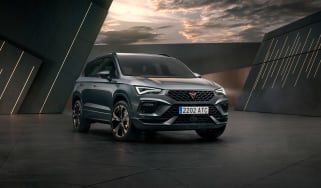