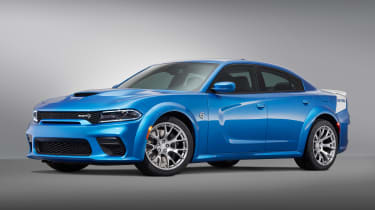 The Dodge Challenger and Charger aren’t given much attention here in the UK, but the addition of ‘Widebody’ to the Charger Hellcat name was simply too much for us to ignore...

Coming as standard on all 2020 Charger SRT Hellcats is Dodge’s Widebody kit, adding new front and rear fascias complete with wide arches for ultimate lane-filling ability. It seems the term widebody is thrown around a little too liberally these days, however a few extra millimeters in width isn’t what the Charger sees in this instance, but almost 89. Under the bulging arches sit new, wider 20in wheels, wrapped in 305 section Pirelli tyres. The new front grille also allows for improved cooling, with the rear spoiler aiming to provide better aerodynamic balance.

Aside from the obvious visual modifications, the new Charger Hellcat sees the addition of adaptive Bilstein suspension, six piston Brembo brakes with 391mm discs for better stopping power, an 8.4in infotainment system, increased front spring rates, larger anti-roll bars and re-tuned dampers. A feature called ‘Race Cooldown’ also now comes as standard, allowing the intercooler pump and radiator fan to run even after the engine has been shut down for cooling of the supercharger.

Under the bonnet sits the same 6.2-litre V8 found in the previous Charger Hellcat, producing 697bhp and 650lb ft. These might be the same figures as its predecessor, but it’s never been a slouch, with 0-60mph coming in just 3.6secs and top speed at 196mph, almost matching the £150,000, limited-run Jaguar XE SV Project 8. 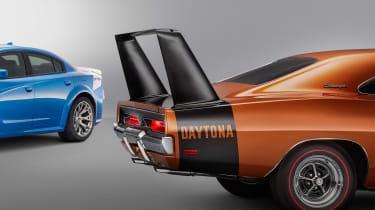 Also teased during the reveal was the creation of a Pikes Peak variant. As for details, the brand stayed tight-lipped, but based on what we’ve seen before it’d likely have even more width for added stability, increased stopping ability and perhaps even more power over the road-legal car.

Recently revealed was also a limited-run variant of the Charger Hellcat Widebody (also available on the Challenger), the Daytona 50th Anniversary Edition. Starting from $74,140 and limited to just 501 units, it adds a bump in power and style, pushing peak power to 717bhp whilst adding new spec options referencing models of the past.

Prices start from $69,645, and order books open at the end of this year, however as you might have guessed, it won’t be sold in the UK – probably a good thing given the size of our roads. The widebody kit is also available on the 478bhp Scat Pack as an option.