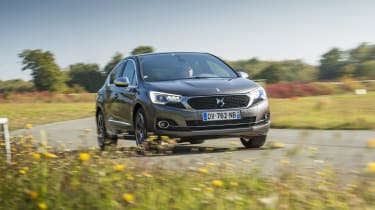 Fans of performance - those likely to be reading this website - are most likely to make a bee-line for the THP 210 model. Familiar from its service in various Citroen and Peugeot hot hatchbacks, it delivers a 0-62mph sprint of 8.5 seconds and a top speed of 146mph in its latest home. Both are suitably brawny for a car of this type, but neither can truly be considered hot hatch-rivaling performance, and better-endowed models from DS's German rivals offer even greater urge.

There is at least a six-speed manual transmission to stir while you extract the DS 4's performance, but while the engine feels strong from lower revs, there feels little left to give beyond 3500rpm. Persevere and it'll pull through the final 1000rpm with increased vigour, but there's little incentive to try. 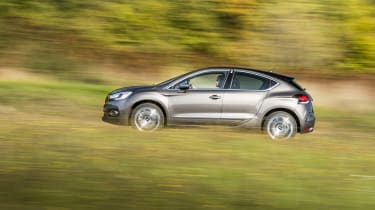 Barely slower but perhaps more suited to the DS 4's more relaxed gait is the BlueHDi 180. Plant your foot, let the automatic gearbox do its thing and you'll reach 62mph just a tenth behind the THP 210, though you'll stop accelerating 19mph shy of the petrol car. While naturally not as smooth as the THP, the BlueHDi is the option for relaxed progress.

Further petrol and diesel models lag these two by small increments, until you reach the PureTech 130. While your eyes might scan over a car with such a forgettable power figure on the spec sheet, it's actually a bit of a gem. It’s so velvety in its power and torque delivery, and despite merely adequate stats of 9.9 seconds 0-62mph and 123mph, it feels much livelier than that thanks to a nice, wide torque curve. Naturally, the three-cylinder thrum adds further enticement to the mix, so unless you have to have a diesel, this would be our choice.