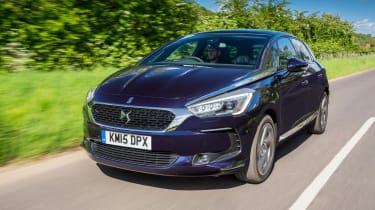 The DS 5 range comprises two petrol models, four diesels and a diesel hybrid variant. Both the petrol models are powered by a 1.6-litre turbocharged four-cylinder marketed under the THP banner – one with 163bhp and 177lb ft of torque, and another with 207bhp and a beefy 210lb ft from 1750rpm.

We’re already very familiar with these engines from various sportier Peugeot and Citroen models – they’re smooth, punchy and not particularly characterful or aurally appealing, though in the DS 5 the latter isn’t as much of an issue, with more bodywork, soundproofing and trim to mute them.

The lower-power model is automatic – a six-speed torque converter unit – while the more powerful engine comes with a six-speed manual.

The entry-level diesel is a 1.6-litre BlueHDi unit with 118bhp and 221lb ft of torque from 1750rpm. It’s available with a six-speed manual or a six-speed EAT6 auto. 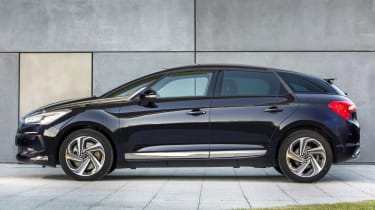 After that, you have a choice of two, 2-litre four-cylinder diesels. The first of these develops 148bhp and 273lb ft of torque through a six-speed manual gearbox, while the second gets a power boost to 178bhp, 295lb ft, and a standard six-speed EAT6 automatic ‘box.

The hybrid is more complicated. Firstly, it’s the only DS 5 to be offered with all-wheel drive – a four-cylinder diesel engine powers the front wheels, while an electric motor on the rear axle supplies drive to the second pair of wheels. It’s also the only DS 5 to use a six-speed automated manual transmission, whose otherwise jerky changes are mildly smoothed by small bursts of torque from the electric motor filling in the gaps.

The engine develops 161bhp of power and 221lb ft of torque, complemented by another 36bhp and 15lb ft from the electric motor. Like most hybrids, the electric motor allows for brief all-electric running as well as boosting power and regenerating energy when required.