The curvy TVR Griffith caught the car-buying public's imagination in 1990, and made the company recession-resistant in the early 90s 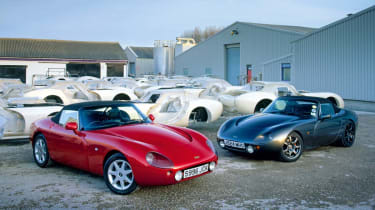 Legend has it that when the Griffith was unveiled at the Birmingham motor show in 1990, orders were taken at the rate of one every eight minutes. Which no doubt put an extra twinkle in the eye of TVR boss Peter Wheeler, who as usual could be found languidly prowling the stand, charming potential customers, cigarette cupped in palm. The Griffith was his first completely clean-sheet launch since buying TVR and its combination of the classic Rover (nee Buick) V8 and some beautifully judged curves proved an instant hit, evoking classics like the Jaguar E-type and AC Cobra. Which was exactly what Wheeler, a big fan of ’60s British sports cars, intended.

What no one could have realised was that the order bank that would accumulate over the coming weeks would effectively cushion TVR against the early-’90s recession. The Griffith not only announced TVR as a player; it ensured its survival as it entered what are now regarded as its golden years.

Its birth wasn’t entirely straight-forward, however. The car that appeared at the NEC that October was pretty much a rebodied version of the old-school V8S which had been launched earlier that year. But when Wheeler and his team returned to Blackpool, they had a rethink. The finished car that eventually rolled out of the factory more than a year later was quite a different animal, using the heavily triangulated steel spaceframe chassis, wider track and all-wishbone suspension of the Tuscan racer.

As engineer John Ravenscroft, a key players at TVR during the Wheeler years, later explained: ‘Originally the Griff was going to be a replacement for the S and there was going to be another car, a Tuscan road car. But the Griffith sort of became that car…’

If the Tuscan gave the Griff its race-proven underpinnings, it was Ravenscroft himself who was largely responsible for the Griff’s good looks. ‘Peter wanted a traditional looking British sports car, so we did the full-scale foam model with upright headlights. I thought it was a horrible, boring, old-fashioned thing. One day I just lopped off the front of the wing where the headlight was, and that left this sort of headlight shape, and I thought, hmm, that looks nice…’

One of the most striking things about the Griff was the total lack of clutter – all the lights were carefully set into the curves; there were no visible handles for the doors or bootlid; the rear numberplate was even backlit to avoid having a light-housing protruding above it. Meanwhile Wheeler and Ravenscroft had avoided unsightly shutlines by hiding the edges of the bonnet and doors in clever recesses. It was this sort of attention to detail that marked the Griffith out as a cut above the norm for a small specialist car maker. The interior was a similar revelation, its swooping curves and alloy detailing burying any lingering kitcar associations and setting the standard for all the fabulous and increasingly exotic TVRs that followed.

The name ‘Griffith’, on the other hand, was a blast from TVR’s distant past. In the early ’60s, US garage owner Jack Griffith dropped a Ford V8 into the tiny TVR Grantura, creating a savagely quick and notoriously tricky handling hotrod. The 1990s Griffith was a far more manageable proposition, though, like Wheeler himself, it didn’t suffer fools. There was no traction or stability control, no ABS, and on the earliest cars no power steering either. ‘There’s just less bullshit in our cars,’ as Wheeler memorably put it.

The engines were 240bhp 4.0-litre and 280bhp 4.3-litre versions of the TVR-fettled Rover V8 mated to the five-speed manual gearbox from the Rover SD1. When we road tested a 4.3 on Performance Car in the spring of 1992 we recorded 0-60 in 4.8sec, 0-100 in 11.2 and a top speed of 155mph on Millbrook’s bowl (call it 160mph on a straight). The handling still needed a little refinement, but it was already pretty well sorted; everything else was absolutely spot on. It looked fantastic, went like a rocket, and sounded even better. Suddenly there was a genuine British alternative to a Porsche or BMW. The Bristol Avenue factory was soon flat out producing around 600 a year.

That the Griffith was so right straight out of the box was proven by the fact it stayed in production, essentially unchanged, for ten years. Total production was around 3000, and although the more practical Chimaera eventually outsold it three to one, it was the Griffith that first grabbed the world’s attention and turned TVR from being just another maker of plastic sports cars into an iconic performance marque which, for the best part of 15 years, would rival the world’s best.