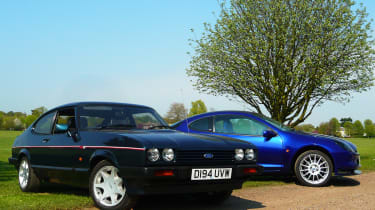 ‘The Capri is the best Ford coupe ever!’ reckons our Senior Designer Adam Shorrock. ‘Nope, it’s the Racing Puma’, I reply back, having driven neither. We’re prone to such debates, and not for the first time this one is entirely based on bias: a love for Capris runs in Shorrock’s family, while I’ve previously owned a standard Puma, and lusted after the Racing since it first appeared in 1999. So who’s right? A trip to Ford’s wealthy heritage collection beckoned to settle a needlessly argumentative score. There’s a host of stuff in Ford’s valuable locker, from a bunch of pristine Model Ts to a modern-day GT supercar, with everything from a spotless mk1 Fiesta to the infamous Supervan in between. Upon arrival, a more than representative example of each car was waiting for us – the last Capri ever made, a 280 Brooklands, and the first Racing Puma to roll off the production line, signified by its V1FRP number plate. We each hopped in our candidates and headed, on a hot April day, to Clacton-on-Sea. A proper Essex day out, then. The Puma immediately lets you know how honed and focused it is compared to its standard, perhaps effeminate sibling. Its wide-arched stance immediately brings numerous rallycross-spec Pumas to mind and I’d bet it’s not much softer riding than them, either; compared to its slightly soft, light-on-its-feet base car, the Racing Puma feels much tauter, will little slack in its controls and more resolute grip.  Cornering is flat, with little or no body roll, though as a result it’s missing some of the skittish fun present in a regular Puma 1.7. It shares an engine with that car, with a power increase from 123 to 150bhp, yet you need to hold onto every rev to find the extra shove. Even then, there’s far lass power than its grippier chassis could happily take and you’re left with a car immensely capable in corners, but which takes a long time to travel between them. The same cannot be said of the Capri. Here’s a car that still feels quick today, which is not always the case you revisit past masters. After the small and distinctly four-pot powered Puma, it feels ‘proper’, its 2.8-litre engine sounding fantastic and delivery of its 160bhp very lusty indeed. And while its late-90s foe boasts an extremely snappy and well judged five-speed gearbox, the Capri’s equally ratioed transmission takes some adjusting to. Using full throttle through its long second and third gears sees you traveling more than fast enough, and is followed by either braking for a corner or short-shifting to a cruise in fifth. Those same straights that troubled the Puma feel half the length in the Capri, but then come the long-nosed car’s problems: corners. Here the Capri does feel its age, the brakes far from confidence-inspiring and the heavy nose not keen to turn. The steering is slow, though this gives you time to measure your inputs through turns. The classic rear-drive ‘slow in, fast out’ cornering mantra is key. While I’ve wanted to drive a Racing Puma since its magazine debut when I was 12, it’s hard not to agree with the majority of the press who drove it then: its badge seems to promise power it doesn’t have while its £23K list price would be tall now, never mind a decade ago. But as a circa-£5K purchase now, it oozes speciality and rarity. And on track, where a stiff, taut chassis is desirable, it would be a real toy. But it’s the Capri I’m clamouring for more time with when we hand back the cars. It’s a coupe the old fashioned way; a big engine up front driving the wheels at the back. Having grown up on a diet of small, frisky front-drivers, it would take some learning, but there lies much of its appeal. So it’s one-nil to Shorrock. Bugger.