evo sprints a Caterham at Silverstone 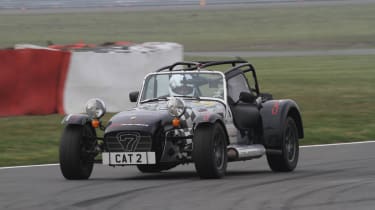 The progression from trackdays to motorsport ought to be a natural one. Both possess a race circuit and a gridful of cars, it’s merely a case of bunching everyone together a bit, cranking up the competition and preparing a big bottle of booze for the quickest driver to spray over everyone else. Yet I found out last year that what I expected to be an exciting transition between the two is actually a pretty scary leap. Circuit racing requires an extreme amount of focus; one which includes switching off the ‘what if’ part of the brain. I perhaps found that step hardest, and the part of motorsport that most goes against instinct. And that’s where sprinting steps in. It’s a welcoming mid-point between a trackday and a proper race, the element of timing introduced but a distractingly packed circuit of cars removed. It’s a great chance to hone car control and track discipline, with some simple mathematics to see if you’re getting it right or not. And that’s what leads me to Silverstone’s Stowe circuit on an early summer Saturday morning, evo’s friendly driving technique expert Colin Hoad and his CAT Driver Training Caterham my ‘team’ for the day. It’s a Mitsubishi Lancer Register event, and we’re (unsurprisingly) in the guest car class. Despite the friendly atmosphere of a sprint event and the veil of education giving me a good excuse for not setting the time boards on fire, I’m still a small pit of nerves when I arrive. This is quelled when I see the other cars in my group. GT-R, supercharged Atom 300, Impreza WRX STI. There’s even an ex-WRC Hyundai. With less than 150bhp, I stand little chance, so I’m immediately competing against myself and some pressure is eased. My first of six timed but unrecorded laps is slow. I’m getting a feel for Stowe, a circuit I’ve never driven before. It’s pretty short, and the quickest Lancers will be lapping in under a minute. My second lap, a ‘proper’ attempt, takes a dawdling 1.22.97, and with my third I break into the teens.  Colin hops into the passenger seat to get a feel for what I’m doing. The good news is that my lines are largely correct. But while I’m upping my speed on each run, I’m taking it off in the wrong fashion. My braking is too road-like, progressive and drawn out. Harder and much, much later is the solution. This is what I work on for the rest of the morning’s runs, getting to the point my brain shouts ‘BRAKE!’ and then waiting another second before standing on the pedal. One run later, and I’ve dropped my time markedly to 1.13.45.  With that area of my driving improved, it’s time to lose my two-metre safety margins through Stowe’s tyre-walled chicane and work on unwinding my steering lock earlier out of corners to get on the Caterham’s responsive throttle earlier. This all swims round my head during what feels an overly long lunch break. I’m gagging to get back out, eager not to take a big step backwards because of too much time away from the track. It’s amazing the focus that recorded runs in the afternoon bring, though. Those who compete in every round of the Mitsubishi championship are fighting for points, and the atmosphere changes as everyone’s concentration increases tenfold. Even I’m caught up in it, as the lunchtime lull counts for naught and I’m back out, more focused than ever. Colin’s helpful mutterings have obviously helped, I now bounce off the rev limiter on Stowe’s short straights where I’d previously managed to remain in second gear in the lead up to corners. Time to use third and throw downchanges into my busy cornering technique… I brake harder, get on the gas earlier and use more of the circuit’s width on each run, and through my six timed runs I consistently cut my time, a 1.08.07 my best. Why was I nervous again?! Some precision organisation sees us gain two extra runs at the end of the day. I sit down with Colin and point out my problem corners. I feel I’m slowing down too much for the third-from-last corner, and that carrying more speed will smooth things out on top of the obvious speed benefits. ‘Have you got room to spin?’ asks Colin. ‘Yes’. ‘Go for it then…’ Out I go for my penultimate run. I feel each corner is my quickest and smoothest of the day, so with courage plucked up, it’s through my trickiest turn with those crucial extra mph. Too many, though. Good job there’s room to spin. Colin’s video VBOX later reveals quicker application of corrective lock should have seen me through, but my concentration is knocked and my final run is off the pace, too. Those extra two runs have been in vain, but God, what a day. I began apprehensive but end the day not wanting to stop. And the best news? I’m not even last in class, beating that Impreza. Sprinting really is a great step up from a trackday. Before you even get into how much cheaper it is than circuit racing (you don’t need a licence, for starters) it’s also much more approachable, with no other cars on track to worry about, a casual, community atmosphere in the paddock and – if you have an advanced driving instructor and a VBOX, especially – some real science and numbers with which to hone your technique. And I can understand the addiction. Each lap I’d get a different area of the track wrong, and improve in another. The chase for the theoretically perfect lap must be tireless. But one I more than recommend you indulge in.  Click here to enquire about sprinting CAT’s Caterham Stephen tries hillclimbing in an Abarth 500 Esseesse More training options with CAT Driver Training