evo's Dobie and Shorrock get to sample a race-spec Caterham with CAT Driver Training. Cue competition... 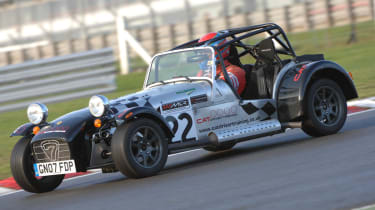 Driver training. It’s tremendous fun. That might come as a bit of a surprise; the word training tends to mean dull powerpoints or making lots of monotonous notes. Alas, a visit to CAT Driver Training involves none of that. It means doing skids in a Caterham and driving at 130mph in a Lotus Elise. I’ve visited CAT before and had a full day’s training (review of that day here), but since that taster my driving experience has grown, and with my confidence building, so has a thirst to learn more about car control. Heading back for more training with Colin Hoad, I took along a pal – namely Adam Shorrock, evo’s crayon-wielding designer and keeper of our long-term Mazda MX-5. As someone keen to learn the rear-wheel-drive ropes, and with skill levels similar to mine, he and I seemed an ideal pair to break in CAT’s new race-spec Caterham. To ensure we were both on the same wavelength, a refresher of core skills – threshold braking, single-radius steering and some theory on throttle control – was in order. A good old Ford Focus did the job here. A fine car, but all it did was whet our appetites for some proper-wheel-drive action. Soon enough, we were pedaling CAT’s trusty Lotus Elise S1 around the high-speed bowl, and getting a thrilling taster of the Bowl’s party trick – going handsfree from the steering wheel at 100mph and letting Lane 5’s camber take us round. Scary, but blooming great fun. The afternoon was what we were both gagging for, though – training on Millbrook’s twisty, challenging and downright brilliant outer handling circuit. With the pair of us taking turns in the Caterham, only one thing was going to happen: competition. The incentive to push that little bit harder to impress Colin more than Adam could was huge. Happily, Mr Hoad was very encouraging and keen for me to go faster and faster. At times I was straddling the edge of my comfort zone, but Caterhams are addictive things and pleasingly approachable to drive quickly. The information you get being sat over their rear wheels is unmatched, and the simple, mechanical and utterly feelsome controls are everything a track novice could hope for. All too soon, the sun disappeared from the sky and the pair of us had to head home, huge grins in tow. Not before asking Colin a vital question, though: who was best? Ever the diplomat, he informed us we’re equal, Adam braver and a smidge faster, and me more technical and considered in my approach to corners. Cop-out. Our day was spot on, though. Each of us discovered plenty about driving a rear-wheel-drive car, balancing its throttle and the confidence you can attack corners with when you do. We learned much about our own driving skills, too, and left the day with a very strong idea of where our strengths and weaknesses lay, and the desire and knowledge with which to improve the latter. Chiefly, though, we had fun. Razzing around in a Caterham is never dull, and learning a thing or two while doing so is no bad thing.

You can read Adam's take on CAT's training, and how he's applied it to his Mazda MX-5, in issue 142 of evo - on sale now