evo's Stephen Dobie and Roger Green have a bash at Harewood Hillclimb in an Abarth 500. Report, picture gallery and video here 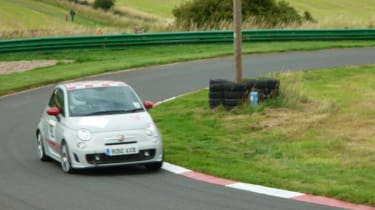 12
Hillclimbing isn’t a motorsport discipline I’ve aspired to compete in. I excitedly (and nervously) made my racing debut on circuit earlier this year, but without gushing knowledge of the hillclimb world – and just a bunch of YouTube clips to go on – it’s something I hadn’t endeavoured to have a go at. And then in came an invite to join features writer Roger Green for some hillclimbing in an Abarth 500 Esseesse at Harewood in Yorkshire. And suffice to say, I think I’m now addicted. The trickiness of Harewood’s course is perhaps one reason – in my five blasts up the hill (two practice, three timed), I was never once happy with my time nor my run, and reaching the end knowing you’ve made a big gaffe or lost a sizeable chunk of time somewhere makes you crave another go, right now. My best time was a 76.2sec – some four seconds off Green’s greatest – though I’ve a stockpile of his second-hand excuses to use, the main one being experience (or lack of it) – he’s been to Harewood in an Abarth before (full report here). The next step? A hillclimb school, to learn where I was losing time and to nail the hillclimbing dos and don’ts so that I can unleash a fresh attack on Harewood’s twists and turns.