What better way to spend a wet weekend looking at some spectacular cars at the Wilton Classic Supercar event. 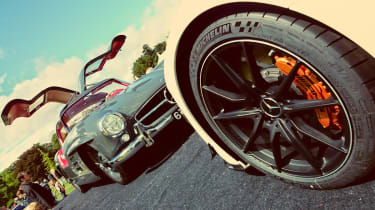 For a country so obsessed with the weather, we do a fantastic job of completely ignoring the forecast when it suits us. Case in point: this year's Wilton Classic Supercar event neatly coincided with the remnants of hurricane Bertha. Yes, that’s right, a hurricane in August, in Salisbury!

As such, you would have thought that this would have placed a dramatic dent in the crowds heading down to the southern English coast, but in true British stiff-upper-lip fashion, the event drew a record crowd.

Despite the wife's skin being just as waterproof as my own, a cursory glance at the grey early morning sky resulted in her electing to remain at home with the baby for this event. The eldest son (three years old) and I packed a few snacks and set off in the V10 BMW M5 for the 90-minute jaunt to the Earl of Pembroke's very fine estate.

The mini road-trip covered motorways, dual carriageways and single-carriageway A-roads, all in absolutely torrential rain. Large pools of standing water have never been a welcome sight at motorway speeds and the first one that sprung into view caused a slight tightening of my grip on the wheel as I was expecting some form of minor aquaplane moment.

Despite British motorways not being set up to handle minor hurricane levels of precipitation, the small lake that had formed in the fast lane of the M4 didn't generate so much as a shimmy from the M5 as the Michelin Pilot Super Sports dispersed the deluge of water with astonishing efficiency. Impressive.

Diving off the M4 and onto the A- and B-roads, I was a little concerned that the tree-covered lanes of the Southern Downs would be pretty slick and a tentative throttle would be required. With the wipers going at full whack and visibility significantly reduced I wasn't looking to test the Michelins' limits of traction at the rear wheels, especially with the little man on board. I was extremely glad to have them on the car at one particular moment, however, as I had to hit the anchors pretty hard when the car in front had a panic attack over what turned out to be a cat darting around by the side of the road. With the pedal pinned, the brakes gave their usual hum while shedding speed over an uncomfortably short distance and I gripped the wheel waiting for the shudder of ABS, and then… nothing. The car just neatly stopped. The Super Sports cling to road like a barnacle.

About a mile from Wilton House the rain vanished and pretty much stayed away for the rest of the day.

The event itself is fantastic. Think of it as a focused version of the Goodwood Festival of Speed but in a way that makes it feel much more intimate, accessible and – dare I say it? – less elitist (that is also part of Goodwood's charm, of course). The hill climb at Wilton is very much a side show rather than the main event as it is at Goodwood.

The main event at Wilton was actually something that revealed itself around lunchtime, as upon arriving in the morning the large lawn in front of the main house was strangely empty. In fact were not many supercars there at all at that point.

Then, slowly, crowds gather and wait patiently for… something. The peaceful country scene was broken as an exotic engine barked into life in the distance, then another, and then dozens all in quick succession. What followed was one of the truly great petrolhead sights as a couple of hundred of the finest machines ever assembled all burbled up the main drive towards the house, blipping throttles and looking spectacular. The assembled exotica covered pretty much every ten-year-old boy’s bedroom wall checklist, and within an hour the entire front lawn area of the house was a tight-knit mesh of millionaire metal.

A nail-varnish purple Diablo, Zondas, a black-on-black Murciélago SV, a red (yes, red) Macca F1, Ferrari GTOs that spanned the ages, Le Mans racers and even an Aston Martin Jet 2+2 concept car were all there in their full glory.

A quick wander around the various stands and a long stop at Pop Bang Colour to chat to Ian Cook about his latest creation was another highlight of the show. If you have not seen Ian's work in the flesh then you are missing out, as he creates the most fantastic pieces of automotive artwork with paint and remote control cars (!) in place of brushes. It’s great to watch Ian create his masterpieces over the course of the day, so several visits to his on-site studio are a must to watch his creation take shape.

Favourite cars from the day? That would be a tough call. The Porsche 959, F40 and Jag XJ220 will always hold fond memories from my youth, but I was again really impressed by cars that I was seeing for the first time, up close and in the metal. A Miura in classic lime green parked next to its latest grandchild, the Huracán (wearing an identical shade of lime green!) was the show-stopper for me. The contrast of what was (arguably) the first supercar stood next to one of the very latest was a fantastic thing to see in the flesh, and as I stood there staring at them I looked down to see my three-year-old by my side doing exactly the same thing. ‘This is how it starts,’ I thought to myself as we both stood there in silence. What is it about these beautiful chunks of metal that captures the imagination of kids and the kids within us as all at any age, I wonder?