A busy day at CarFest sees Dion admiring some special cars, while a family-friendly atmosphere entertains the kids. 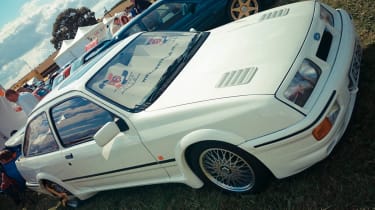 Now in its third year, CarFest certainly seems to be hitting its stride. Offering an altogether different feel to the well established events on the UK calendar such as Goodwood Festival of Speed, it does offer some very different attractions.

With a 25,000 person maximum capacity (vs 150k at Goodwood) CarFest feels like a much more intimate affair and is probably best described as a festival that features cars, rather than an event that is for those solely obsessed with them. To be honest, it’s actually the better for it – especially when you consider that this is designed as a family event.

The schedule for each day is jam packed with activities that really will appeal to everyone in the family even if cars are not necessarily their main passion in life. A full size music stage with some pretty major artists (for such a small event) performing (Kaiser Chiefs, Jamie Cullum etc) dominates the eastern side of the farm along with a hugely varied food and drink village.

The hill climb tarmac effectively splits CarFest in half. The western fields are consumed by dozens of displays, interactive events, shops and stands as well as the car clubs, paddocks and kids play areas.

Despite the hill climb being billed as the core of the event, it’s a much more sedate affair than Goodwood. Many of the passengers in the vehicles have paid for their rides via the charity auction process that leads up to the event. Helmets are not generally worn, as the drive up the hill is usually pretty gentle allowing the occupants plenty of time to wave to the crowd.

Cars heading up the hill are grouped into squads of seven. Chris Evans’ personal Ferrari collection headlines the event, with sets of F1 cars, race cars, Movie star cars and even more, pleasing the crowds over the weekend.

With the action on the main part of the hill being a bit sedate, the best spot deemed to be just on the start line where quite a few of the racing cars got the crowd going with all out maximum attack launches off the line. The best of the bunch was the Michelin shod Nissan GT-R Nismo GT3 from the Blancpain Endurance series, with its ear splitting V8 and side exit exhaust, it literally sent a few spectators slinking back from the barrier with fingers firmly buried in their ears.

As a great illustration of what a diverse event CarFest is, the Blancpain GT-R was followed moments later by Wheeler Dealer’s Ed China driving a combined toilet, wash hand basin and bathtub built around a motorbike frame. Yes, really!

Aside from Chris Evans’ lovely Ferrari 250 GT and other stratospherically priced exotica, it was also very nice to see some more unusual items such as Colin McRae’s Focus WRC car, the Back to the Future DeLorean and a Police liveried Aerial Atom which is a fully functioning part of the Hampshire constabulary and their efforts to catch speeding superbike riders!

Aside from a few negatives such the price of food and drink on site and a very challenging ticket booking system, I don’t think CarFest can be beaten currently as a family event that incorporates a motoring theme.

The festival genuinely has a really nice feel to it, a friendly atmosphere and its not overcrowded. We will definitely be back next year.