The Goodwood Revival is one of the UK's best-loved historic motorsport events. Here's our 2014 report and gallery 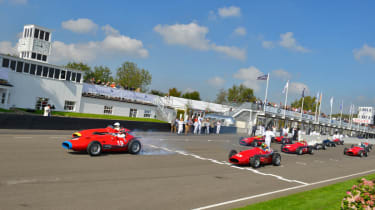 One of the world’s most prestigious historic motor sport events, this year’s Goodwood Revival attracted record crowds in its 17th running. 148,000 visitors turned up to view the action on-circuit, in the paddock and in the air, enjoying anniversary celebrations for Maserati, the Jaguar D-Type and Sir Jackie Stewart’s career.

A collection of the Scottish legend’s racing vehicles took part in a huge parade, celebrating the 50th anniversary of the Scot’s first single-seater test at Goodwood in 1964. Stewart himself led the way in his Tyrrell Cosworth 006 – the Grand Prix car in which he won his third Formula One title in 1973.

On-track highlights included close-fought battles in the RAC Tourist Trophy and the St. Mary’s Trophy for 1950s saloons, while visitors could amble around recreations of BMW’s Park Lane showroom of the 1950s, the fantastic classic Michelin garage and the annual Earl’s Court Motor Show revival. Throw in crowds dressed to the nines and Battle of Britain recreations in the sky, and 2014 confirmed the Revival’s must-visit status.

To celebrate the latest running of the event, Michelin produced the following video: