The Malaysian city of Putrajaya hosted the second Formula E round, with Sam Bird the victor 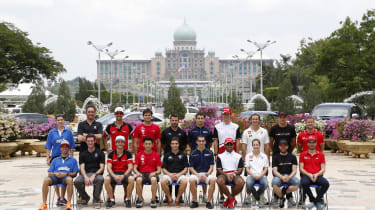 FIA Formula E racing may not yet have the profile of Formula 1, and its Fan Boost feature might draw accusations of gimmickery on-par with F1's double-points final round, but the series is quickly establishing itself as a serious outlet for racing.

And just as Formula 1 had a British victor this weekend in Lewis Hamilton, Brit Sam Bird took victory in Putrajaya. After securing third place on the grid, Bird made the most of the 50-minute race to grab the top spot on the podium.

Unlike the F1 it'll be a while before Formula E's title is decided, and Lucas di Grassi's second place in Malaysia  from 18th on the grid means he still leads the series ahead of Bird following his win in Beijing.

Nicolas Prost has moved up to joint third in the series. His spectacular accident in the last round didn't stop him picking up three points, and a further 15 from fourth place (despite a 10-place grid penalty for his Beijing crash) plus a fastest lap moves him level with non-finishing Franck Montagny. Third in the race fell to Sebastien Buemi, who, like di Grassi, drove a spectacular race from near-last on the grid.

Katherine Legge, Nick Heidfeld and Bruno Senna all received Fan Boosts at the Putrajaya race, but all came to grief in separate incidents throughout the race.

'It’s very sad what’s happened to him and this one is for Jules' said Bird after the race. 'The weekend went really well, we were quick from the first outing and we were quickest in practice... The first stint [in the race] I was able to get a very good gap which meant we could take it easy and not make any silly mistakes, do some lift and coasting, and coast to the finish.'

Formula E now moves on to Punta del Este in Uruguay for Round 3, on December 13.