Anthony Davidson wrapped up the WEC title in Bahrain. He reckons tyres played a pivotal part... 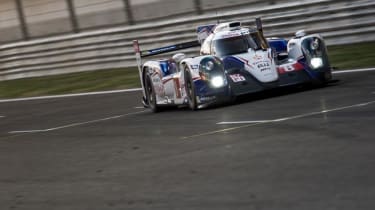 Winning the Championship in Bahrain

Sebastien [Buemi] and I knew that only reliability could stand in our way for the race win. So of course, that’s exactly what happened in Bahrain! When they told me to box the car, I just smiled.

We had an alternator issue that forced me into the pits; all I could do was watch the laptimes of everyone and our position tumble as the guys worked on the car. As frustrating as that time was, I knew we didn’t need the win to secure the championship, so as long as the Audi wasn’t near the top three, I was fairly relaxed.

Once we got going again we fought our way back up to eleventh. The Audi didn’t make the podium, which was enough for us to secure the championship with one round remaining. To top it off, the sister car took the race win, so for Toyota it was a great weekend.

Now the Championship’s wrapped up, I’m so relieved. It was on the cards for so long – since Fuji we’ve had great momentum – so if we would have lost the Championship due to reliability at these last two races, that would have been heartbreaking.

To win a World Championship is just fantastic. I'm so proud of what we've achieved as a team.

Why tyres made us winners

An interesting thing happened in Bahrain. We made a few setup changes on the car in FP3 (the final test session before qualifying) because Sebastien wasn’t happy with the balance. Normally, your focus in FP3 is for qualifying, so one lap pace. Instead, we chose to focus our efforts around tyre wear, and that ended up being a great call.

We’d learned a lot of lessons in Shanghai where the surface is similar to Bahrain for tyre wear, and that convinced us to focus our efforts around achieving a good race car. That meant setting the car up so it was kind to its Michelins across the race distance.

Don’t get me wrong, qualifying pole is great as it gives you the chance to feel good ahead of the race, but in endurance racing, it’s much less important.

For that reason, when our tyres were approaching that critical window where we’d normally switch to new rubber in FP3, I really pushed for us to stick with the same tyres so we could perfect the race balance.

My thinking behind this was based around the fact that new tyres mask an ill-handling car. I knew that if I threw on a new set of tyres, the car was probably going to feel ok, but that would only last for a few laps. Having driven the car on the old tyres, I really wasn’t convinced the setup was strong enough for the race.

We didn’t run new tyres at all in FP3, sticking with our 40-lap old set for its entirety and making the changes we wanted on that same set. As we improved the car through the session, the car eventually felt much better and our laptimes were competitive, matching our closest rivals who were running on slightly newer tyres.

I was really happy with the results in FP3, so to then stick on new tyres in qualifying and find that the car balance was still good, it proved we were right to make the call to stay on old rubber.

My experience with tyres definitely helped with this call. I’ve experienced tyres masking problems with cars before, and know how in endurance racing it's equally as important to set the car up for old tyres as it is new.

I'd love to say that I have an experience advantage here, but pretty much every driver in the WEC field has extensive amounts of experience. We’ve got drivers who’ve learned the art of tyre management all the way up from karting, so levels of knowledge are quite similar.

I think where both Sebastien and myself have excelled this year is in the way we can extract speed from our Toyota throughout long stints. We can keep the tyres alive for longer than our main rivals, and I think our understanding of the way that the tyre needs to be treated and handled throughout the weekend, it’s been very good.

We also made the right call with pretty much every tyre choice ahead of the first race, so we arrived at each circuit with the best rubber to do the job.

The great news is, we’re expecting the Michelins to be even better next year. This year was the first season that we’ve been running with the narrower, less grippy tyres, so knowing how fast Michelin learns, we should have quite a bit more mechanical grip underneath us in 2015.

The Constructors’ Championship is still all to play for, so we’ll be doing our best to secure that for Toyota at the final round in Sao Paulo. If Audi doesn't get pole position, then we only have to score three points. For that reason we feel like it’s there for the taking, we just have to do the job on the day.

For Sebastien and me, we’ve wrapped up the Drivers’ Championship so we’re going to Brazil to enjoy ourselves. Having said that, we want to end the season on a high, so we've no choice but to go for the win!

evo wants to congratulate 2014 World Endurance Championship Champions Anthony Davidson and Sebastien Buemi on their fantastic achievement. The pairing will challenge for the final win of the season in Sao Paulo on 30 November.