The best car spoilers and wings ever: picture gallery

evo chooses some iconic rear wings - what cars would you add to our list? 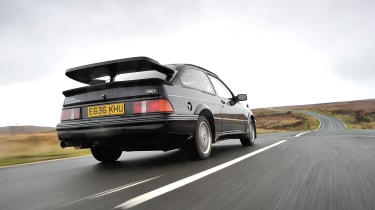 For some, the humble spoiler is the physical evidence of marketing fluff used to sell a dreary shopping car with an inappropriate 'sport' moniker. For others, it's a mere appendage helping mitigate some undesirable aerodynamic effect.

Furnished with photographs from our magazine features, we've selected a small number of cars whose spoilers stand out, either for their engineering or their aesthetics.

All here have purpose, whether contributing to the model's rally or racing success or eliminating the lift of less-than-optimal shapes. But they're also shapes to appreciate, indelibly linked to the car's silhouette.

A Sierra Cosworth without its huge rear wing or a Delta Integrale lacking its little roof-mounted flick of polycarbonate just isn't a Cosworth or an Integrale. Great cars, for sure, but not the iconic shapes they have since become.

There are cars here we have certainly missed - largely because evo hasn't yet got around to driving them - but if there are any we've forgotten, let us know in the comments section below.