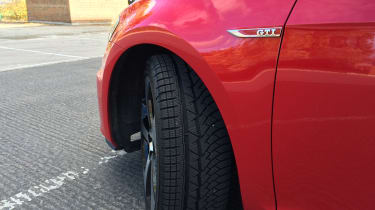 It’s nine in the evening and I’m sitting at my laptop after 10 hours in the most important seat in the Golf GTI. A business trip to Cardiff from my Lancashire home meant I was on the road even before Chris Evans bursted the bubble of a peaceful night at 6.30am. I returned home after a mammoth 457-miles behind the wheel later that same day.

On the drive home from Wales I couldn’t help but think what an accomplished long distance car the GTI is. The adaptive cruise control takes care of throttle and braking brilliantly, and with the DSG auto ‘box it will come to a complete stop without the driver having to do anything; handy during the stop start traffic of a rush hour M6.

It might sound like something a petrolhead would hate - it’s a primitive form of autopilot after all - but on mundane motorway journeys it’s undeniably brilliant. Add these electronics to comfortable seats and a standard audio system with impressive quality, and I can’t deny that the Golf GTI is a welcome companion on long journeys.

Jon's had his Michelin Pilot Alpins on for the winter

The GTI makes for such a comfortably motorway cruiser, that I can happily say the only car I saw on the motorway which I’d rather have been in for the journey was a new Bentley Continental GT Speed. Given that the Conti costs six times the price, this is a huge compliment to the Golf. The fact it returned over 40mpg makes me even more certain I was right to choose ‘I’ over ‘D.’ The small amount of extra economy offered by the diesel in real world usage isn’t too big of a deal to me.

It was just this morning I walked out of my house to be greeted by winter frost, the temperature gauge showing a minus sign and the warning of icy roads flashing up on the dash. For the first time in my 10-years of driving, this was exactly the warning I had been hoping to see. Finally my new Michelin Pilot Alpin 4 tyres have the chance demonstrate their worth.

After scraping the ice from the windscreen, I jumped back into the warmth of the toasted tartan cloth and as soon as I’d punched the destination postcode into the satnav, I set off for the motorway. Conveniently, this involves 10-miles of cross-country B-roads, making it the perfect test for front-end grip with the temperature at minus two.

So how did it handle the cold tarmac? The biggest compliment I can offer is that the car didn’t feel any different to how it does in double digit temperatures, which I had experienced just a couple of days earlier. The roads were dry, yet still I’m convinced there’s a greater connection with the road than I’ve ever felt with the old summer tyres. High praise, but I was very impressed and had total confidence in placing the car just where I wanted it on the road.

In the interests of conducting a thorough test, I tried some hard braking from the national speed limit and was stunned at the stopping performance the tyres helped to deliver. All in all, they performed excellently.

It was interesting reading Sam Riley’s fast fleet report last month in evo 204, as he mentions what the ‘perfect’ set up of the GTI’s driving modes is for him. Mine is almost exactly the same, with me leaving everything in Sport, though I do leave the suspension in Comfort as opposed to Sam’s preference for Normal.

I also have my steering set to Comfort as I’m not too keen on the artificial weighting of the Sport setting. Comfort feels a little more natural to me, even if it is quite a bit lighter. The electric system doesn’t offer a great deal of feel either way, something it seems we’ll have to become used to in new cars.

Unusually warm temperatures at the close of 2014 had meant properly testing my winter Michelin Pilot Alpin 4s was tough, but at least we have been able to assess the full spectrum of their ability. With the temperatures now consistently dropping below freezing I’ll be able to test them even more comprehensively from here on. More on that next week…