Sébastien Loeb, a media onslaught and thick snow on stage 1: Tuthill Porsche takes us behind the scenes of Monte's build up 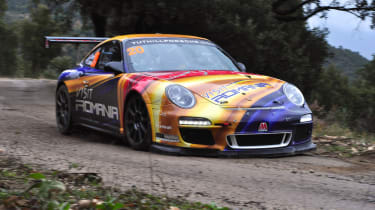 Following a rewarding two-day test for the 2015 Monte Carlo Rally on mountain roads close to Monaco, we knew the Tuthill Porsche 997 R-GT was ready. Our driver - four-time WRC winner, François Delecour - was happy with the handling on Michelin tyres, and the specially developed EXE-TC dampers were keeping our two-wheel drive 911 connected to the expected mix of low grip surfaces.

Testing video shared by evo.co.uk with our last blog had unveiled the car’s exciting new Visit Romania! livery for the first time, and fans had fallen in love with it. With team and supporters keyed up for Monte, we headed towards the start with adrenaline flowing.

The Porsche 911 RGT's flat-six tone is popular with fans

Monte Carlo would be run over four days. Starting on Thursday with a media-friendly start in Casino Square, there followed a ceremonial start in the harbour before the rally cars set off for the first two stages, run at night around the snowy ski resort of Gap.

The Visit Romania! Tuthill Porsche was one of the cars shown outside the Casino, and was directed to park alongside the Citröen WRC car of nine-time World Rally Champion, Sébastien Loeb. Loeb enjoyed Porsche guest drives at a number of Porsche Supercup rounds last year, so he and François had a good chat alongside the 997, in front of every camera gathered in Monaco.

If this rally was all about media interest, we’d have won the event there and then. But we were here to race, and two exciting night stages lay ahead. As the cars lined up to start in turn, thick snow lay heavy on much of stage one, with brief spurts of dry tarmac splitting treacherous patches of black-ice.

Shakedown at the Monte Carlo Rally

Reigning world champion, Sébastien Ogier, set off in his updated Volkswagen Polo WRC and we were glued to live onboard pictures from the WRC+ service. Stage one would deliver an almighty surprise for rally fans, and a welcome surprise for our team.

Find out how the Delecour got on in the 997 911 RGT in Tuthill Porsche’s next blogpost.