evo Track Car of the year - the cars, the stats and the winner 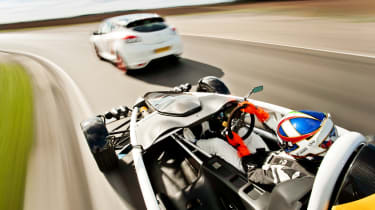 evo Track Car of the year, in association with Michelin, is a chance for us to assess which of the year’s most track-focused vehicles are the quickest – and which best offer the Thrill of Driving so central to evo’s ethos.

It’s quite unlike evo’s regular Car of the Year competition, mainly because the requirements of a track car can vary wildly from those of road vehicles.

Freed of the need for some degree of day-to-day usability, it allows up a lineup as diverse as the one you see here – where an 80bhp Caterham goes wheel-to-wheel with everything from a BTCC-supporting Clio Cup race car to a full-blown GT3-spec McLaren.

Below is a little more info on this year’s runners and riders – as well as their specifications, and lap times around the tricky Blyton Park circuit in Lincolnshire.

With a 2.0-litre supercharged Honda engine sat between its passengers and the rear wheels, the Atom is as much of an adrenalin boost as ever.

In this tune it develops 350bhp despite weighing just 550kg. There’s a pneumatic paddleshift transmission, a locking diff and Ohlins dampers. Only a price tag nearing £100,000 on our test car marks it down.

Mazda’s MX-5 has always offered thrills at sane speeds, but that isn’t to say it can’t be improved with a little more power. BBR’s turbocharged conversion extracts 268bhp from the 2.0-litre four-cylinder.

While £6900 might seem like a lot of extra money on an inexpensive car, it still represents great value in terms of performance. Marino Franchitti and Dickie Meaden both praised the BBR during the test.

Undoubtedly the coolest car on eTcoty 2014, the Lola-inspired Broadley is eligible for historic racing classes and makes you feel like a 1960s Le Mans driver.

Marino summed up the car by saying, ‘it made me feel like Steve McQueen’ – but there’s more to it than that, as demonstrated by its lap time.

Comfortably the least powerful car on this year’s test, the Caterham is still a hoot. Up to a point, anyway – the point at which the lack of power and relative lack of grip from the tiny tyres leave it feeling outclassed.

The Caterham is one car that, while fun on the track, is really better suited to road use. There, its back-to-basics thrills and indeed its economy make a lot more sense.

The purest race car in this year’s competition, it’s little surprise the 650S GT3 set the quickest time around Blyton. Despite producing less power than its road-going equivalent, the full slicks and wings setup makes it mighty on track.

It’s also a big improvement on its 12C GT3 predecessor, according to Marino. The chassis setup, gearbox and even the seat are all steps up from the 12C. The race-biased traction control works perfectly, too.

It’s not as quick as the pure-blood GT3 car, but the Sprint is still prepared with track driving and indeed racing in mind.

The engine, transmission and ProActive Chassis Control system are all largely as they are in the road car, but an aero kit, new iron (rather than ceramic) brakes and 19in centre-lock wheels are all new.

At £125,000 the Nismo GT-R isn’t far short of twice what the GT-R cost when it originally hit UK shores. The allure of Nissan’s motorsport brand can’t be understated however, nor can its 592bhp twin-turbocharged V6.

It’s hugely effective on track – if not quite as quick around a lap as the 911 GT3 – but also big fun and staggeringly fast.

Already enjoying its position as evo’s Car of the Year 2013, the GT3 is equally at home on track.

It’s fast and effective, but the GT3’s continuing strong points include its levels of interaction and that light-weight agility. It’s definitely one of the best cars here…

Radical is a regular at evo’s track competitions, and unsurprisingly the near-race levels of grip and speed mean it walked away from Blyton with one of the quickest lap times – if not as fast as the cheaper Ariel.

In subjective terms though, the RCX Turbo didn’t do quite as well this year, with concerns over its accessibility. On the plus side, Radical is more than adept at setup tweaks to improve it.

In production form the Clio 200 hasn’t gone too well at evo Towers – particularly in the company of excellent hot hatch attempts from Ford and Peugeot.

The Cup car is a different thing entirely, however. It’s basically a miniature touring car, with 220bhp, an aggressive limited-slip differential, huge grip from its slick tyres and a proper six-speed sequential gearbox. Cheaper than a Trophy-R, too…

The Trophy-R achieved a high position in the regular evo Car of the Year competition, and once again it proved its worth on track too.

Even in this company it feels uncompromising, but it’s great fun – and illustrates that a car set up for the Nurburgring can work well at other tracks too...