There's little time to celebrate winning in Monte Carlo, as the Tuthill team is straight back to work on the 911 RGT 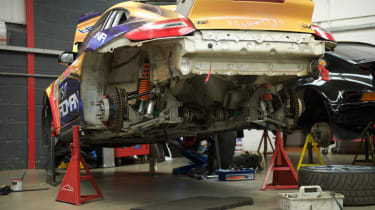 A packed schedule for the Tuthill Porsche crew left little time for celebration following our R-GT win in the Monte Carlo Rally. The team enjoyed a few quick beers in a Monaco bar before it was time to load up the service vans and head back to England. 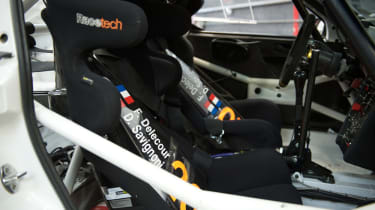 While team boss, Richard Tuthill, flew straight to our Below Zero Ice Driving camp on a frozen lake in Sweden for some filming with Tiff Needell and the Fifth Gear TV crew, the mechanics were already forming the to-do list for the R-GT strip and inspection once the car was back at base.

The Tuthill team knows a thing or two about ice driving...

The second round of the 2015 R-GT Cup does not run until June, with the Ypres International at the end of the month, but our winning 997 would not be allowed to rest on its laurels. As our R-GT project must sell customer cars to cover its costs, a series of tests in the UK and Eire were lined up for February, so the car had to be re-prepared without delay. 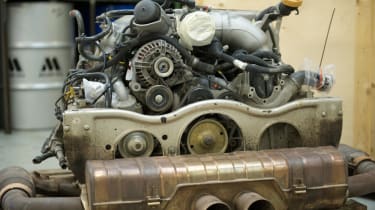 First job on arrival back in Wardington was a blast with the jetwash before entering the rally workshop, where the car went up on jackstands. Then the engine, transmission, wheels and Michelin tyres were removed, before the rest of the car - brakes, suspension, oil lines and more - were stripped and inspected.

Tuthill’s historic 911s are built to our tried and tested recipe for maximum durability. Though we’ve put all our expertise into the GT3 Cup car base of our R-GT challenger, the WRC offers a unique set of challenges, so we expect to learn new things about our car on every outing this year. 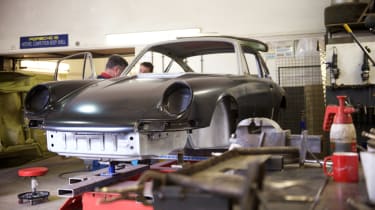 Apart from the expected wear to consumable parts, one faulty O2 sensor and a cracked rear anti-roll bar mount, R-GT had exhibited all the resilience expected of a Tuthill Porsche. The transmission strip showed no serious wear and an engine leakdown and borescope inspection revealed nothing to worry about. The car was re-assembled, filled up with fuel and marked ready for testing.

Next time: spectators out in force as R-GT hits the Emerald Isle with a classic stablemate