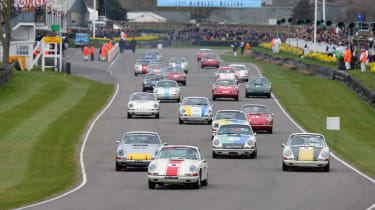 With the Tuthill Porsche 911 R-GT rally car continuing its exhaustive testing program between its maiden victory on the R-GT Championship on the Monte Carlo Rally and round two, the Ypres Rally in June, Tuthill Porsche has remained busy between rounds, turning its attentions to historic motoring racing.

Our team recently claimed another podium finish, this time in historic racing, at Goodwood’s 73rd Member's Meeting John Aldington Trophy race for pre-’67 Porsche 911s. Our hopes were pinned to the 1965 short-wheelbase 911 race car of Mark Bates, which was fully restored and prepared for historic racing in the Tuthill Porsche workshops.

This pretty Light Ivory 1965 SWB car is the fourth 911 we’ve built for the EB Motorsport team. Over the course of our six-year partnership, Tuthill Porsche 911s have carried lead driver Mark to multiple race wins and championship titles.

Hampered by slower cars in qualifying, practice times left little doubt that race pace would be stronger. When the flag dropped, Mark stormed from fourth on the grid in the number six 911, to finish second behind British Touring Car champion, Andrew Jordan. It was Mark’s first race at the Goodwood circuit. 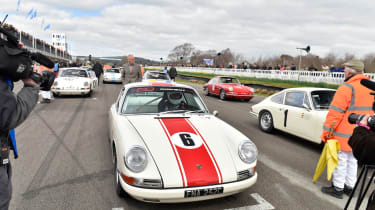 'A lot of hard work went into our preparation for this race, to ensure maximum performance within the stringent Aldington Trophy regulations,' said Tuthill team boss, Richard Tuthill. 'We did three specific tests: one at Goodwood a few weeks before, some laps at the Rockingham Circuit and finally some fuelling test runs on the Thursday before the event, to optimise a new exhaust.

'Mark’s success in his first race at the circuit is an incredible achievement. We’re delighted to supply EB Motorsport with potent Porsche platforms, to help Mark work his magic: our next joint venture will be even more impressive!'

Learn more about Tuthill Porsche historic racing and follow the team’s current road, race and rally Porsche 911 projects on the website at www.tuthillporsche.com.

Ride onboard Tuthill's classic 911 below