Open-world racing game for the Xbox One tested 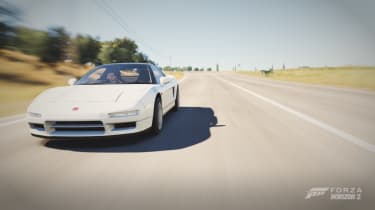 Forza Horizon 2’s unique selling point runs something like the introduction to an evo Car of the Year test. You’re given a swathe of southern Europe to explore – areas such as the Côte d’Azur and Tuscany – and hundreds of fast cars in which to negotiate the region’s curves and villages.

This stunning scenery, the backdrop of so many great evo drives, plays out in glorious detail through Horizon 2’s high-fidelity graphics. Cars hold up to all but the closest scrutiny, with reflections, vibrant paint shades and environmental effects like rain and dust modelled with incredible detail. Water beads on your virtual car's bodywork and leaves a reflective sheen on the road, the scenery is rendered far into the distance and you really get the sense of driving around in a large, living environment.

The sounds are great too, making every prod of the ‘accelerator’ a joy whatever your current choice of wheels. Particularly satisfying are the classic vehicles and supercars, whose multiple aural delights further immerse you in the experience, particularly if you choose to race from the intricately-detailed cockpit view. 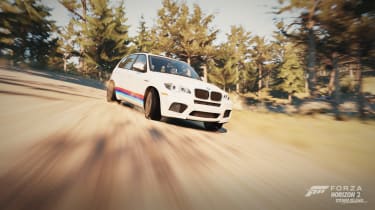 You start at the bottom, of course. Your character has travelled to Europe to take part in the Horizon Festival – a seemingly endless automotive gala that acts as a hub for the region's racing activities. Naturally one must buy an affordable vehicle and work through predictable series – hot hatchbacks, 1990s cars – to earn enough to progress. Money and experience is awarded for high race positions, stunts, scenery destruction and more, and new cars and locales are opened up with each series victory.

It’s here that some of Horizon 2’s less favourable points begin to surface. Car handling is accurate enough and varies from model to model, but even small, lightweight vehicles can feel lumbering thanks to slow joypad responses. The result is that with just the Xbox One’s tiny analogue stick for steering, slides and fishtailing can be difficult to control, particularly if you choose to race with driving aids minimised or switched off.

Frustrating too are the races themselves. Revved up after purchasing a Ferrari F40 or a beautiful Alfa TZ2, you’ll scratch your head in confusion as to why you’re being asked to compete on dirt roads and traverse vineyards. Doing so can be exciting, but the cars rarely seem to tally with the races you're competing in. 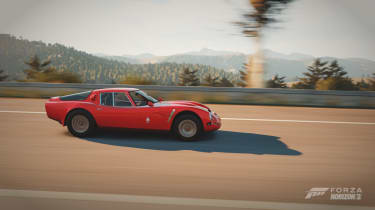 Difficulty levels of the aggressive ‘Drivatar’ virtual competitors and vehicle driving aids can be varied, but sometimes a lost race is fundamentally down to the game’s mismatch of cars and courses – no matter how much you abuse the have-another-go ‘rewind’ feature to correct misjudged moments.

One way to improve your chances is to eschew the game’s vast library of modification parts. Giving your car more power does little but make it more difficult to control. Competitors are matched to your car anyway, so tuning doesn’t yield an advantage – it's solely an excercise in personalisation. It does let you create some spectacular vehicles though, and Forza's tradition of drivetrain swaps and endless graphical options continues unabashed.

The exception to the above is if you’ve paid £15.99 extra for the Storm Island expansion pack. Among the extra vehicles and roads is access to parts such as special tyres and raised suspension. It’s probably the most fun you’ll have in Horizon 2, throwing away the pretension of realism and concentrating solely on scenery-blurring speed. 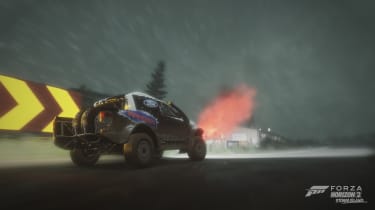 As the name suggests, Storm Island also majors on the kind of muddy, rainy graphical flair that Horizon 2 already excels at. This does limit views of the scenery – it's not quite as vibrant as the full game anyway – but it gives the expansion a different personality to the millionaires' playground feel of the full game.

Forza Horizon 2 looks fabulous, is great fun in parts, and collecting and modifying the game’s vehicles can be a real joy. It’s just a pity that the physics aren’t a little less punishing – in a title where points are scored as you smash into telegraph poles, fences and other road users, a little more arcade-style accessibility wouldn’t be out of place.