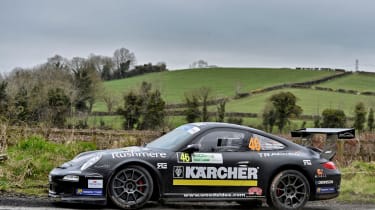 Day two of the 2015 Circuit of Ireland Rally brought glorious sunshine. Puddles remained from the previous day’s showers, but not enough to dampen the spirits of Robert Woodside and co-driver Allan Harryman, who were delighted to be back in the hunt after an earlier clutch problem.

The Michelin tyres worked hard as our 911 R-GT flew through a four-stage loop, to be run once in the morning and once in the afternoon. This was the longest day of the rally, with an added power stage through Lisburn town centre at lunchtime. 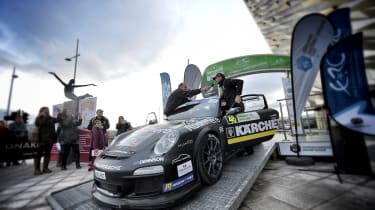 Rallying calls for fast, precise driving with absolute reliability and that was just what we got. Robert was inch-perfect in the twisty Lisburn stage and didn't put a foot wrong all day. The Porsche performed immaculately, bringing fans flocking to it whenever it stopped for long enough. We left Ireland delighted with our rewarding return to this famous Porsche heartland.

With that, we reach the end of 12 evo Magazine blogs, sharing the story of our Porsche 911 R-GT rally car. From winning this year’s Monte Carlo Rally to our latest adventures in Ireland, the R-GT category for modern sports cars in top level rallying remains something very close to our heart. 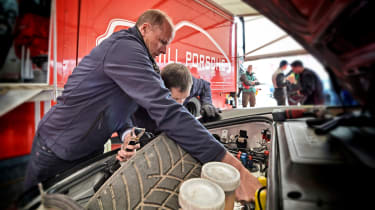 As thrilling as it is to drive these legendary events in our 997 R-GT car, we are racers who need competition, so we hope to see more GT cars out on the stages as the year unfolds. We’ll continue to push for R-GT cars on gravel rallies.

Until that happens, we have much to look forward to, with the epic East African Safari Classic Rally at the end of this year. After taking a record 17-car team to the last Safari Rally, we’ll take fewer cars this time around, but it will be no less challenging.