Can Tuthill Porsche fix a mechanical gremlin in time to stay in the running? 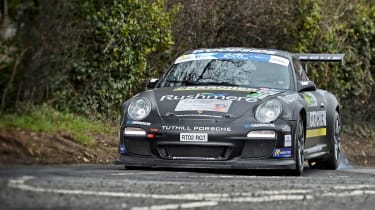 Our 2015 Circuit of Ireland Rally enjoyed a good start, with two trouble-free runs on the shakedown. Despite the slippery conditions, Northern Ireland’s Robert Woodside and co-driver Allan Harryman were settling in to the Tuthill Porsche 911 R-GT on its Michelin tyres.

At the ceremonial start outside Belfast City Hall that evening, the crowds went wild for the 911. The stage was set for the exciting return of a contemporary Porsche to this historic rally for the first time in almost thirty years. 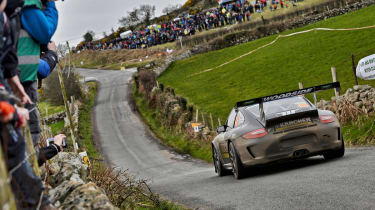 Day one of the Rally dawned cold and wet. Overnight rain had left lots of standing water on the roads, so the crew took a cautious approach on the first of two runs through a three-stage loop.  The high-speed Hamilton’s Folly stage, famous for numerous jumps, whetted spectator appetites for the high-flying Porsche, so a great buzz awaited the crew when they returned to service at lunchtime.

The rain stopped and roads dried ahead of the afternoon’s running, and Robert pushed the Porsche harder. On arrival at the evening’s special stage through Newtownards town centre, all rally talk revolved around the Porsche.

The excitement was cut short on the Newtownards start line. Ready to thrill thousands of spectators gathered ahead of it, the 911 lost drive. The crew tried to get the Porsche moving, but a trailer to service soon became the only option.

Back in our service area, we removed the transmission and inspected the clutch pack. One clutch plate was found to have lost all of its material: a suspected manufacturing defect. The clutch pack was replaced and we fitted revised front and rear dampers, which would better suit Robert’s driving style.

By the time the mechanics were finished, it was almost 2am. This had been a long day, but we were still in the rally. Day two lay ahead: it would be a cracker.