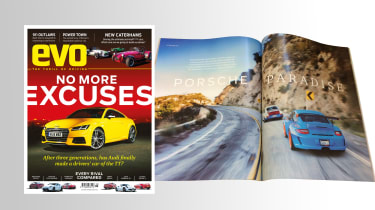 Subscribers have already received their copies of the latest issue, but if you haven’t yet subscribed you can now pick up evo 209 from your local newsagent.

If you like Caterhams, sports coupes or tuned Porsches you’re in for a treat, and as ever we’ve got test drives of the latest performance cars too. Keep reading for a full rundown of evo issue #209.

Audi’s new TT – here in S specification – is the company’s best shot yet at making a TT that drives like a sports car. evo pits the new TTS against its toughest rivals from Porsche, Alfa Romeo, Lotus, Peugeot, Nissan and BMW.

Okay, so perhaps there’s one TT more suited to spirited driving than the new TTS – that car is the Sport TT Cup one-make racer. Richard Meaden gets to grips with the new racer.

Colin Goodwin visits the original McLaren factory in Woking, to investigate where one of the world’s most famous F1 teams and supercar makers originated.

evo tests the three newest models in the Caterham range. Plenty of fun, but there’s much more to the test than that – as we’ll be building the winner…

If you’re a Porschephile you’ll have heard of Magnus Walker and Sharkwerks. Both have caused a stir on the Pacific coast – and Jethro Bovingdon gets to drive two of their most iconic offerings in issue #209.

Henry Catchpole delves into the world of helmet design and, with the help of some legendary names, demonstrates why new FIA rules are misjudged.

Ferrari’s fondly-remembered V12 GT is evo’s latest ‘icon’. Prices are as affordable as they’ll ever be – is it worth your money?