Among the facsimiles of European SUVs, the Shanghai motor show provides some interest for evo readers, too 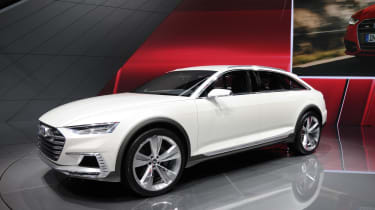 The Shanghai motor show doesn't yet have the cachet of Geneva, or the excitement of Detroit. But as China's presence in the automotive industry grows, the products launched in the world's most populated city are more relevant than ever.

Well, those that aren't extended-wheelbase versions of executive cars or shameless copies of European products, at least. Visitors to the Shanghai show in 2015 have to look a little harder for sports cars, supercars and high-technology...

When evo spoke to Audi design director Marc Lichte at the Geneva motor show, he hinted that future Audi vehicles would be much easier to tell apart. Among the techniques to achieve this is to furnish all quattro models with distinctly blistered wheel arches inspired by the original ur-quattro.

The Prologue Allroad concept is evidence of this styling detail in action. While typical Allroad details are also there – such as contrasting wheel arches and roof rails – the squared-off front and rear wings are the most notable details. The 724bhp, twin-turbocharged V8 plug-in hybrid drive system is less likely to reach production vehicles.

Concept cars have become less conceptual in recent years. Typically, they’re lightly-disguised production vehicles with a few non-production details to generate a buzz for an upcoming model. It’s safe to say Chevrolet’s FNR Concept in Shanghai is not one of those vehicles.

Designed at GM’s Pan Asia Technical Automotive Centre, it’s interesting more for its striking design than its dynamic attributes. There’s little wrong with an all-electric powertrain, as the Tesla Model S P85D proves, but the car’s autonomous driving abilities don’t quite tally with the Thrill of Driving. 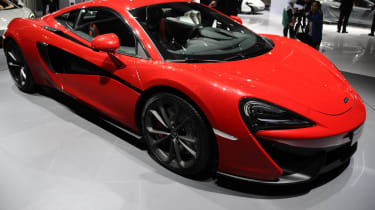 If you thought the McLaren 570S represented affordable McLaren ownership, then the 540C is another step towards accessibility. £126,000 isn’t cheap of course, but it does bring the badge to a whole new range of owners.

Despite McLaren’s move towards affordability, the 540C retains a mid-mounted 3.8-litre twin turbocharged V8. Here, it produces 533bhp and 398lb ft of torque, enough for a 3.5-second 0-62mph dash and 199mph top speed. With a carbon fibre MonoCell II chassis and McLaren’s Brake Steer system, it’s not your typical base model.

Mercedes continues its new naming scheme with the GLC Coupe. GL marks the car out as one of the brand’s SUVs, while the ‘C’ refers to the car’s class in the range. While still a concept, it doesn’t take much to imagine a production version clogging up your local Waitrose carpark.