Anglesey Circuit, summer 2014. A McLaren P1 and a Porsche 918 Spyder are lapping Britain’s most picturesque racetrack at speed, with one very big question to be answered. The VBOX data shows the P1 has covered Anglesey’s 1.6 miles in 1min 12.6sec. To the moderate surprise of the onlooking crowd, myself included, the 918 betters it by two-tenths of a second.

Ordinarily that would be that, but the P1 has one more card to play. As standard it’s delivered on Pirelli P Zero Corsas, but customers can specify Trofeo Rs if they so choose. The McLaren technicians bolt on a set of the super-sticky Pirellis, the P1 heads back out on track and it lowers the benchmark to 1min 11.2sec.

It’s a vivid demonstration of the role those four bands of rubber play in the overall performance of a car. Of course, you don’t need a hypercar and an empty circuit to appreciate the benefit of a decent set of boots. This year, we’ve tested 225/40 R18 tyres from ten different manufacturers. In contrast to some other magazine tyre tests, subjective performance is a significant factor in our results, accounting for some 40 per cent of the final score. The results have also been weighted in favour of the tests that determine outright performance, such as lap times and braking distances, over matters of convenience, such as road noise and cost.

Our particular test car was a Performance Pack model with a limited-slip differential and DSG gearbox. In dry testing the paddle-shift ’box removed the risk of a fluffed manual gearchange that would skew the data. During the wet handling tests we used third gear only, which removed one more variable from the test and further ensured our data was accurate and comparable. 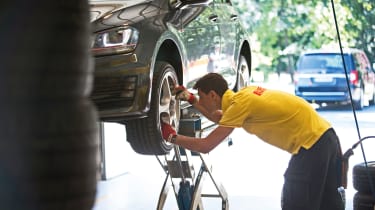 Pirelli’s Vizzola test facility near Milan was our base for most of the week. Here, we could test each tyre’s wet handling performance, wet and dry braking ability and aquaplaning properties. We also used the public roads around Vizzola to judge ride comfort and tyre noise.

For the dry handling tests we decamped to the Circuito Tazio Nuvolari, an hour south of Milan. The 1.8-mile track features a combination of tight, second-gear corners and fast, open sweepers. The high-speed left-right sequence halfway around the lap was particularly revealing – on the grippiest tyres this section could just about be taken flat out.

The tested tyres were all 225/40 R18; names, speed and load ratings shown in brackets in our gallery below (scroll right to see all 10 tyres). Prices are from BlackCircles.com and are per tyre, including VAT but excluding fitting. Each set was independently sourced and scrubbed-in before testing began. The same sets were then used throughout, with the less destructive (i.e. wet) tests conducted first. 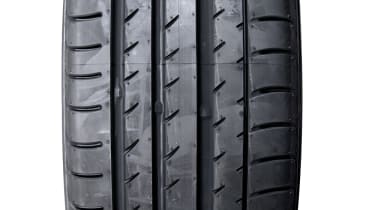